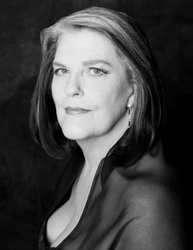 Diane McNaron is an American singer, producer and Cabaret entertainer. She has worked as a stage director and cabaret, art song, opera and jazz singer throughout the US and in Europe, Venezuela and Australia.

McNaron studied Opera Production at Florida State University from which she received a Master of Music degree in 1973 and at Indiana University with Ross Allen, Max Roethlissberger and Hans Busch. As a singer, she coached with Eleanor Steber in New York, Frau Professor Ena Thiessen at the American Institute of Musical Studies in Graz, Austria, Metropolitan Opera soprano Gianna d'Angelo and with the Kurt Weill repertoire coaches Randolph Symonette and Lys Symonette She served as an Assistant Director for the Opera Barga Festival in Italy, studying stage direction with Gino Becchi in 1977. She worked as a voice professor and theatrical stage director at several universities and colleges including Northern Arizona University, Northwestern State University of Louisiana and the University of Adelaide. Australia, from 1978 to 1988. On her return to the US, McNaron became a free-lance singer in the fields of Jazz, Cabaret and Art Song, a cabaret producer/director and voice coach. During 1991, she created the Cabaret duo, Masters’ Cabaret, showcasing songs of Lotte Lenya and Marlene Dietrich. In 2000, she released the CD Music in Flight featuring pianist Shari Boruvka and the works of Kurt Weill, Hanns Eisler, Paul Dessau, LaDonna Smith and Ed Robertson, written while the European composers were in flight from war and political oppression. The album was endorsed by Doctors Without Borders (MSF), winners of the 1999 Nobel Peace Prize.

In 2004, McNaron launched the ensemble, The Politically Incorrect Cabaret, a twelve-member troupe of writers, singer/actors, dancers and instrumentalists, presenting topical political satire in a Berlin-style setting. The troupe plays across the Southeast. Her CD Rosas de Pulpa; Rosas de Cal. recorded with the pianist Heather Coltman, pianist Adam Bowles, violinist Karen Bentley Pollick, violist Melanie Richardson Rodgers and cellist Craig Hultgren featuring the compositions of Valdo Sciammarella, was released in 2010. McNaron has received grants from the Alabama Council for the Arts and the Lowder Foundation. She is based in Birmingham, Al where she maintains a private voice studio and is a member of the National Association of Singing. She appears widely in the genres of jazz, cabaret and art song.