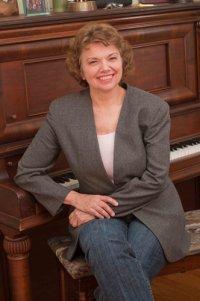 Title: Voice Teacher
Bio: Gaye Klopack has taught vocal music in the Chicago Public Schools for 25 years and has been a private voice teacher for over 23 years. As a singer, she has performed with the Grant Park Symphony Chorus and been soloist with Ars Musica Chicago and the Chicago Choral Artists. Most recently, she has performed with Cantate Choir for Chorus America. In 2013 she released a CD of jazz standards, Small Day Tomorrow. She has performed with Oscar Brown Jr., Clark Terry, Erwin Helfer and Johnny Frigo. Ms. Klopack has also served on the Board of Directors for the Chicago Jazz Orchestra. Gaye Klopack graduated with an M.A. in Vocal Pedagogy from Northeastern Illinois University in 1997 and has been a choral director and voice teacher in Chicago for over 23 years. In 2009 she was honored as a “Distinguished Teacher” by the United States Department of Education for mentoring a Presidential Scholar in the Arts. In November of 2010 she was the featured cover story for Choral Director Magazine. She has taught choral methods and vocal music education at Northeastern Illinois University in Chicago and has been a featured lecturer for “Jazzin’ Up Chicago Public Schools” for the Chicago Institute of Jazz. In November of 2010, Ms. Klopack was featured on the front cover of Choral Director Magazine.
Voice Type: Mezzo-soprano
Music Styles Taught: Pop; Opera; Jazz; Classical; Musical Theatre
Availability: I am available as a performer; I am currently accepting private students; I am available as a clinician or presenter