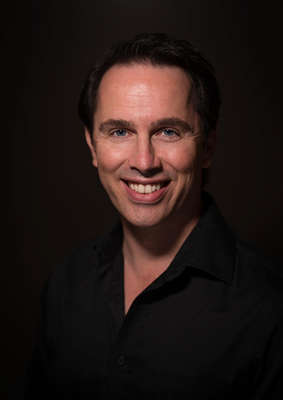 A native of Nova Scotia, Ron de Jager is excited to be at Briercrest College and Seminary for his eighteenth year. He completed a Doctor of Musical Arts at Shenandoah University in Winchester, Virginia. Recent research and recitals have focused on nationalistic Canadian vocal music, particularly works by Torontonian composer John Beckwith. Throughout his studies Ron has had the privilege of being mentored by Lorna MacDonald, Elvira Gonella, Greta Kraus and most recently, Dr. Janette Ogg.

On May 23, 2012, Dr. de Jager had the honor of singing for Prince Charles and The Duchess of Cornwall at the Legislative Assembly of Saskatchewan commemorating the Diamond Jubilee of Queen Elizabeth II. The ceremony was broadcast nationally on CBC and CTV. At the request of the Lieutenant Governor of Nova Scotia, he was the guest soloist at the inauguration of Pier 21 on Canada Day 2000. In addition, Ron has enjoyed performing opera, oratorio, solo recitals, musical theatre, film and ballet. Select performances include The Five Mystical Songs by Ralph Vaughan Williams, Papageno in Die Zauberflöte, Billy Budd in Billy Budd, Harry Easter in Street Scene, Major General Stanley in Pirates of Penzance, Eli Black in Without a Hitch?, Curly in OKLAHOMA! and the title role in Maury Yeston’s Phantom. In May of 2013 he started Briercrest Summer Stage during which he served as Artistic Director and played the roles of KoKo in the Mikado and Matthew in Anne of Green Gables. Ron has performed as a recital soloist in Canada, the United States and the Netherlands and enjoys collaborating and performing with his talented wife, pianist Elena de Jager. Favorite recital selections include works by German composers Schubert, Loewe and Schumann as well as compositions by Handel, Debussy, Poulenc, Laitmann and Beckwith. Reviewers have written, Mr. de Jager’s singing “….showed a refined and precise sense of the colour and atmosphere of the music” (Toronto, 1997), “….in the second act he went on to sing the most touching moment of the evening” (Halifax, 2001) and “the role of the Major General is brilliantly portrayed by Ron de Jager whose experience is apparent in his brilliant expressions and rendition of the famous tongue-twisting tune.” (Moose Jaw, 2012) Ron has been honored as a winner in the National Auditions of the American College of Musicians, MATS competition and Kiwanis Festival. He has been awarded the Monica Rychman Award, William Cary Award, Nova Scotia Cultural Development Grant and was nominated to the Golden Key Society. Additionally, he enjoys serving as a vocal adjudicator and has adjudicated festivals and competitions in Saskatchewan, Alberta, British Columbia, Nova Scotia, New Brunswick and Virginia. As an associate professor at Briercrest College, he enjoys teaching private voice, vocal pedagogy, vocal master class, musical theatre workshop, acting, directing opera scenes and the Briercrest Christmas Musical, giving leadership to College Singers and Resonant and giving leadership to the performing and worship arts department while maintaining a performance schedule. “I am incredibly grateful for the many teachers, collaborators and performers who have generously given of themselves. These people chose to pass on what was given to them and their years of experience and wisdom remain an inspiration to me each day. I hope to do the same.”

Voice Type: Baritone
Music Styles Taught: Opera; Folk; Classical; Musical Theatre
Availability: I am available as a performer; I am currently accepting private students; I am available as a clinician or presenter; I accept students through a college or university program