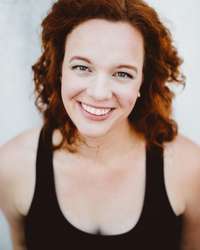 Beth grew up with extensive experience singing in choirs, church, musicals, and classic rock. In college, she studied opera, while also participating in musicals, madrigals, choir, and a pop a cappella group, where she also began arranging songs. In graduate school, she continued to study opera, and also began teaching voice lessons and singing for recording sessions. She also directed church music from 2009-2014.

Her past roles include Fiona in Shrek, The Witch in Into the Woods, Susan in [title of show], Prudy in Hairspray, Dorabella in Così fan tutte, Meg Page in The Merry Wives of Windsor, Suzuki in Madama Butterfly, and Zita in Gianni Schicchi.

Today, she is a voice teacher/coach/adjudicator in the Hampton Roads area of Virginia, as well as an active performer. She is also Managing Director of A Cappella Academy.

Voice Type: Mezzo-soprano
Music Styles Taught: Pop; Opera; Jazz; Folk; Gospel; Classical; Musical Theatre
Availability: I am available as a performer; I have a wait-list for private lessons; I am currently accepting private students; I am available as a clinician or presenter