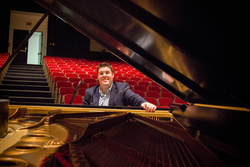 Bio: William A. Murphy, is the Staff Accompanist at Morehead State University, in Morehead, KY. He is a graduate of Marshall University with a Master of Arts in Performance (Piano). Previous to his position at MSU, he was an adjunct faculty member at Marshall University starting in January 2013 that involved many roles of education and collaboration. Those roles included teaching private applied voice, theory and aural skills, class piano, directing the Choral Union, and pianist/coach for the Opera Workshop. As a graduate student at Marshall, he was a finalist for the Spring 2012 Marshall University Concert of Soloists Competition performing the first movement from the Shostakovich Piano Concerto, No. 2 with the MU Orchestra and was second prize winner of the WVMTA Mountain State Collegiate Piano Competition in October 2012. Since April 2010, he has been the Organist at St. John's Episcopal Church in Huntington and in 2013, he received the Colleague Certificate from the American Guild of Organists. In addition to this position, he has been the pianist/organist for the West Virginia Symphony Chorus in Charleston performing large choral works including Messiah (Handel), Ein Deutches Requiem (Brahms), The Ballad of William Sycamore (Stevens), and Weinachts-Oratorium (Bach). He received a Bachelor's of Music in Voice Performance with Cum Laude honors from Morehead State University in December 2009. He participated as a student and accompanist for the participants of the Kentucky Institute for International Studies program in Salzburg, Austria (Summers 2007 and 2009). Mr. Murphy has performed with numerous students in the Marshall and Morehead music departments for degree recitals and jury preparations. He occasionally is a staff accompanist for the KY State NATS and Mid-South Regional NATS competitions. He is happy to return to his Alma Mater and looks forward to continuing his passion for collaborative music at Morehead State University.
Voice Type: Baritone
Music Styles Taught: Opera; Classical
Availability: I am available as a performer; I accept students through a college or university program