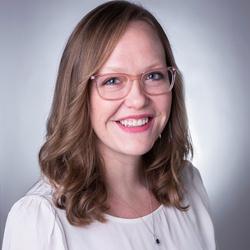 Karisa L. Templeton (Millington), soprano, is Assistant Professor of Voice at North Dakota State University Challey School of Music. An active performer of opera and avid art song enthusiast, she has sung with Opera on the Avalon, The Princeton Opera Festival, New Voices Opera, Reimagining Opera for Kids, and the Beijing Festival Chorus. She greatly enjoys programming recitals of lesser-known vocal gems and highlighting compositions from historically underrepresented groups including women and composers of color.

Karisa received a B.M. in Music Education with an emphasis in Voice and Choral studies from Cedarville University in Ohio. She received her M.M in Voice Performance & Pedagogy from Westminster Choir College and is a doctoral candidate in Voice Performance at Indiana University. Prior to her new role at NDSU, Karisa has been a Visiting Assistant Professor of Music at Wabash College where she taught voice and served as the Interim Glee Club Director. She previously has taught musical theatre voice at the University of Evansville and voice at the Stafford Music Academy and Belvoir Terrace Arts Camp. As an educator, Karisa has a strong enthusiasm for the anatomy and physiology of the voice, the physics of sound, historical and present theories of teaching singing, and diverse vocal repertoire. Her research focuses on developing innovative voice pedagogy curriculum for music educators and performers. Additionally, her background teaching in Asia and working with international students has led to her research into culturally responsive pedagogy practices for the music studio. Karisa’s operatic roles include Helena from A Midsummer Night’s Dream (Britten), Cleopatra from Guilio Cesare (Handel), Donna Elvira from Don Giovanni (Mozart), Marschallin from Der Rosenkavalier (R. Strauss), Sifare from Mitridate (Mozart), Queen from The True Story of Cinderella (Martin), Dido from Dido and Aeneas (Purcell), and Laurie from The Tender Land (Copland).