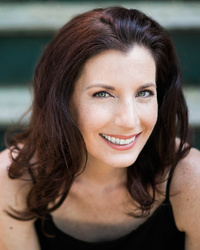 Jennifer Sgroe began her musical career in dance and musical theater before moving into the operatic repertoire. She holds performance degrees from two of the Top 20 Opera Training programs in the US distinguished by The Richard Tucker Foundation﻿ including a Bachelor of Music degree in Vocal Performance from the University of Kentucky, a Master of Music in Opera from The Boston Conservatory ﻿and a Doctorate of Musical Arts, also from the University of Kentucky. Her DMA document made the first formal study of the songs of Boston composer Scott Wheeler. She is a seasoned teacher, administrative leader and producer, having put her talents to use in various sides of the performing arts and within academia. Her primary voice teachers include Everett McCorvey, Sara Goldstein and Arthur Levy. ﻿

Dr. Sgroe has been teaching voice for over eighteen years at the university level, in private studio and community music schools. She is a proud member of the National Association of Teachers of Singing (NATS). Past university teaching positions include New York University, the University of Kentucky, Transylvania University, Dean College and Emerson College. She also has a background in opera outreach education having worked with several opera companies as a teaching artist, including Utah Opera, Opera New Hampshire, Opera of Central Kentucky and Lexington Opera Society.

In March 2011, she joined the Voice Faculty of New England Conservatory’s Preparatory & Continuing Education Division and held the role of Chair of the NEC’s Preparatory Voice Department from Fall 2011 - Spring 2015. During her time as Chair, she developed the Prep Voice curriculum to include age-appropriate class voice training opportunities for young singers, class piano for singers, the very first musical theater courses in the history of the conservatory and the masterclass and workshop series. This year (2020) marks her ninth year on the faculty at NEC Preparatory School and the School of Continuing Education, where she also works with adult singers of all ages and levels, including recent college graduates, former Preparatory School alumni, members of the Tanglewood Festival Chorus, actors, and professionals from all walks of life who choose to continue to develop their voices and musical gifts.

Dr. Sgroe’s experience as performer, academic, pedagogue and administrator, is further enhanced by her experience as producer and musical entrepreneur for the past sixteen years, developing and executing a variety of successful musical programs and events across genres and in collaboration with varied musical ensembles and performers including a The Spirit of America Benefit: For the Victims of 9/11 Fund in September 2001 in Lexington, KY. Produced in only three short weeks, it raised $40,000, involved over 300 performers, seven different performing groups and reached an audience of more than 1,400 in one night. She is currently developing the Refugee Voices initiative, a concert project of newly commissioned vocal, choral and orchestral music which will amplify the stories of refugees through song.

For more about her performing background visit: www.jennifersgroe.com

Originally from New York, soprano, Jennifer Sgroe now resides in historic Salem, MA with her husband Matt and maintains a private studio in Salem, MA and in New York, NY.

It is my goal as a teacher of voice, diction, vocal repertoire, anatomy and function, pedagogy, and acting the song to support singers on their journey of vocal discovery and development, as my mentor teachers and coaches have supported me during my own development. I believe that vocal growth mirrors our own human development and self-realization very closely. As we make discoveries about our voices we make discoveries about ourselves. We release muscular tensions and our self-view loosens up a bit too. Consequently, it is an intensely personal journey - no two singers are alike, nor will they develop at the same rate.

With patience, clear, specific technical guidance, and an encouraging energy I aim to help singers gain access to the most free and expressive sounds that they can make, so that years down the road, they may still possess the skills and understanding to make informed decisions about their voices. Some may go off into performing or teaching, others may find their way to other branches of the vocal arts and musical fields or work as voice care professionals and voice scientists but it is my hope that the skills they learn through vocal training will always serve them well as healthy singers and speakers and fully expressed individuals with an intimate understanding of this art form and that vocal expression through art or life is our human birthright.