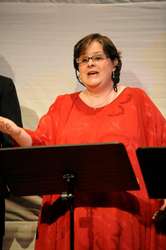 Bio: Norene Morrow studied at the Universities of Manitoba (Winnipeg) and Arizona (Tucson) where she earned her Bachelor and Master’s degrees in Vocal Performance. She also studied Advanced Choral Conducting through Brandon University. Currently, she is working on her diploma in Speech Arts and Drama from the Royal Conservatory of Music. Over the years, Ms. Morrow has worked at a variety of institutions as a vocal instructor, choral director, and music theory instructor. These have included the Penticton, Vernon and Kelowna Music Schools in British Columbia, Algoma University and Algoma Conservatory in Sault Ste. Marie, Ontario, the University of Manitoba (Winnipeg), Mennonite Brethren Bible College (Winnipeg) and Steinbach Bible College (Steinbach), as well as two years as a graduate teaching assistant at the University of Arizona (Tucson). Choral directing credits include Musaic Vocal Ensemble (a chamber choir) in Summerland, BC for 3 years and music director at St. Michael and All Angels Cathedral in Kelowna, BC for 10 years, as well as various other community and church choirs. She has given numerous workshops and courses across Canada and has adjudicated at a many of music festivals. Performance work includes recitals, soloist in concert works, some opera work, and lead and ensemble roles in musical theatre productions. As a musical theatre performer, some of her credits include Fiddler on the Roof (Golde), Anne of Green Gables (Marilla), The Pirates of Penzance (Ruth), Carousel (Nettie), South Pacific (Bloody Mary), Into the Woods (Jack’s Mother), Kiss of the Spider Woman (Molina’s Mother), Footloose (Vi Moore), My Fair Lady (Mrs. Pearce), A Funny Thing Happened on the Way to the Forum (Domina),La Cage aux Folles (Madame Dindon),and Jekyll and Hyde (Lady Beaconsfield). Currently, Ms. Morrow has a private voice/music theory studio in Kelowna, BC and teaches speech arts and drama classes at Penticton Academy. She is singer/actor with local theatre companies and many of her students have gone on to theatre in schools across Canada and in the US to train as professional performers. They have also been very successful Royal Conservatory exams, resulting in some regional gold medals for the highest mark in the province.
Voice Type: Soprano
Music Styles Taught: Classical; Musical Theatre
Availability: I am available as a performer; I am currently accepting private students; I am available as a clinician or presenter; I offer lessons in a group environment