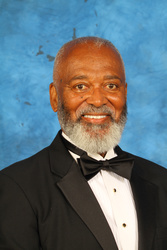 Title: Associate Professor of Music and Interim Chair Department of music
Bio: J. Robert Adams, DMA is Associate Professor of Voice and interim Chair of the department of Music at Clark Atlanta University. He is the Project Director for the Department of Music’s Lab Enhancement Grant; funded through Title III. In addition to the aforementioned, Dr. Adams is a recitalist/teacher, and soloist for the First Church of Christian Scientist; Fayetteville, Georgia. Adams performed as part of the High Museum’s “Make a Joyful Noise” exhibit, Atlanta, Georgia. He has performed over seventeen complete opera roles and more than fifteen characters in numerous opera scenes programs. Dr. Adams has performed with the New York Harlem Theatre for whom he performed as an independent Artist with their productions of Porgy and Bess in the Grand Théatre de Genéve, Switzerland, and Teatro di San Carlo, Naples, Italy. Adams also performed with the Atlanta Opera Opéra-Comique’s production of Porgy and Bess, in France, Spain, Normandy and Luxembourg. Other performances include the roles of Commendatore, Opera Festival di Roma and Rome Opera Festival; Don Alfonso, Cosí fan Tutte, and Titus, The Candlers of Callan by Sharon Willis. Dr. Adams was Music Director for Three Penny Opera and Carmen Jones; CAU Players. He was Professor of Music-Voice, and Chair of the Department of Music at Elizabeth City State University, North Carolina. Adams also served as Head of the Division of Arts and Humanities, Professor of Music-Voice, and Chair of the Department of Fine Arts at Knoxville College, where he also directed the college choir, Knoxville, Tennessee. Robert was also Project Director for the Missouri Artists Series, Lincoln University. Adams served as President/Registrar of the Alabama Chapter of the National Association of Teachers of Singing (ALANATS). He also served as Regional Registrar for the southeast region of the National Teachers of Singing (NATS). J. Robert Adams was invited to premiere the winning composition, An Anthem for a Doomed Youth, by Mark L. Weiser, at the NATS national conferences in Seattle Washington, and, Tampa Bay, Florida. He presented Lecture/Recitals for the College Music Society’s Southern Chapter Conferences in Jackson, Tennessee and Tampa, Florida; titled African-American Folk Music - Sacred, and, African-American Folk Music - Secular, respectively. He was also selected to attend the Christa Ludwig Singer’s Master Class at Carnegie Hall, New York, and was a regional finalist for the MacAllister Award in Atlanta, Georgia. Adams performed with the Nashville Symphony Orchestra, and Studio Lirico, Italy. Dr. Adams authored an article titled Black Music, published by the Missouri Cultural Heritage Center, Columbia, Missouri. J. Robert Adams holds the Doctor of Musical Arts degree in Voice from the University of Illinois, where he studied under the tutelage of Professor William Warfield. He also holds the Master of Music degree in Voice from the same institution; Master of Arts in Ethnomusicology; and Bachelor of Arts degrees from the State University of New York at Buffalo.
Voice Type: Bass
Music Styles Taught: Opera; Classical
Availability: I am available as a performer; I am currently accepting private students; I am available as a clinician or presenter; I offer lessons in a group environment; I accept students through a college or university program