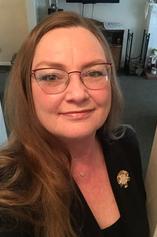 Bio: Crystal Fleuty Isola earned her Bachelor of Education in Music with an emphasis on vocal performance from the University of Alberta in Canada and a Master of Fine Arts in Theater from Brandeis University. She conducted her first choir at 17 years old and has had a private vocal music studio and a performance career, mostly in musical theater. She is originally from Canada, where she performed for 9 years in the longest running educational TV show on CBC, other than Sesame Street, called Making Music for Children. She was also part of a radio program called All Join In for 12 years and has adjudicated in a large Kiwanis music festival there. She has taught music from preschool to adult and in schools for 30 years and was the interim music director at the First Unitarian Church of San Jose. She is currently the choir teacher and music department chair at Lynbrook High School in San Jose. Lynbrook has a stellar music history. The choirs have won unanimous superior ratings at local California Music Educator festivals and won the audition to perform at the inaugural All State California Music Educators Festival in southern California where her choir won an unanimous superior rating. It has been THE most represented school in California in the American Choral Directors Association Honor Choirs. The choirs have toured Germany, Austria, England, Mexico, Canada, Hawaii and have sung at Carnegie Hall twice. Crystal believes in establishing good bel canto vocal production with vocal warm ups that focus on breath support, good vowels, and voice placement. She uses quality repertoire to work on interpretation, phrasing and the basics of performance. Good tone quality is Crystal’s forte.
Voice Type: Soprano
Music Styles Taught: World; Pop; Opera; Jazz; Folk; Gospel; Rock; Classical; Musical Theatre
Availability: I am currently accepting private students; I am available as a clinician or presenter