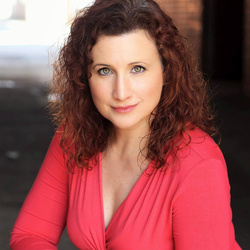 Wendy has appeared on stages from NYC to Chicago to Tokyo and performed with artists such as NEA Jazz Master Jamey Aebersold, legendary jazz guitarist Howard Alden, Crystal Gale, and has sung backup for the alternative hip hop group Deltron 3030. Wendy is the featured vocalist with the Asheville Jazz Orchestra, the Page Brothers Gypsy Jazz Quartet, is regularly featured as a soloist with the Carolina Concert Choir, and remains active as a professional jazz vocalist and actor.

Wendy received a B.M. and an M.M. in vocal Performance from Appalachian State University and then joined the voice faculty there where she taught for 8 years before embarking on a full time, professional singing/acting career. Having sung with Opera Carolina, Appalachian Opera Theatre, and the Brevard Music Center Opera, her favorite roles include Adina in L'Elisir d'Amore, Laetitia in The Old Maid and the Thief, and Papagena in Die Zauberflöte. An accomplished Equity actor as well as singer, Wendy has appeared in leading roles on stage of many professional theatres throughout the U.S. including Florida Repertory Theatre, Flat Rock Playhouse, Little Theatre on the Square, Temple Theatre, and Blowing Rock Stage Company in roles such as Miss Sandra in All Shook Up, Brenda in Smokey Joe's Cafe, Luisa in The Fantasticks, Fiona in Brigadoon, and Eliza in My Fair Lady.

Wendy has also appeared as a soloist with the The Symphony of the Mountains, the Western Piedmont Symphony, the Asheville Choral Society, and the Carolina Concert Choir in works such as Vaughan Williams' Dona Nobis Pacem, John Corgliano's Fern Hill, Bach's Magnificat, and Mozart's Great Mass in C Minor.

She was one of nine singers chosen after extensive auditions in North America, Europe, and Australia to appear at Tokyo Disney in the Broadway review Encore!

From 1991-2008 she was a frequent headliner and lead production singer/dancer on cruise ships and it was during this time that she wrote Everything is Rosie (a one woman show celebrating the life of Rosemary Clooney) and Ladies and Gentlemen (a cabaret show celebrating the pioneers of traditional pop music such as Frank Sinatra, Tony Bennett, Peggy Lee, and Ella Fitzgerald). Each of the shows premiered in central Florida at the Winter Park Playhouse in 2009 and 2010 respectively. Wendy has always enjoyed working behind the scenes as much performing. She has served as director and choreographer for numerous regional theatre productions throughout the southeast as well as the director of opera while she was on the adjunct faculty at Brevard College. She also served as the director of the vocal jazz ensemble, Studio 18, while an adjunct faculty member at University of North Carolina - Asheville and formed and directed the high school jazz vocal ensemble, Vagabond Voices, at Flat Rock Playhouse during the fall of 2016.