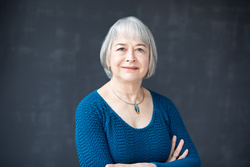 Lisa Stidham, soprano, has taught voice students of all ages and levels for the past thirty-five years. She is currently Teacher of Vocal Studies at Oberlin College, where she teaches Beginning Voice Class and Secondary Lessons. Her holistic, whole-body approach to teaching singing emphasizes alignment-based, healthy singing in multiple styles. Before coming to Oberlin, she lived in the Los Angeles area and was a member of the voice faculty at Scripps College, Biola University, the University of Southern California, CalArts and California State University, Los Angeles, among other institutions. In addition, she was a Vocal Coach for the Los Angeles Children’s Chorus. She has sung in opera, concerts and recitals in the United States, Europe, Australia and South America, presenting a wide variety of repertoire from Monteverdi to Mozart, Purcell to Britten, and especially living composers such as John Harbison, Donald Crockett and Stephen Hartke. She was praised by New York Times music critic Anthony Tomassini for her recording of Stephen Hartke’s Sons of Noah: “The work is a tour de force, a miniature opera written (as a birthday gift!) for the composer’s wife, Lisa Stidham, who makes the most of the dramatic and musical opportunities here.” Her operatic and Musical Theater roles include Lauretta in Gianni Schicchi, the title role in Flotow’s Martha, Mercedes in Victor Borge’s tour of Carmen, and Marsinah in Kismet.

She holds a DMA in Vocal Performance from USC, an MM degree in voice from the San Francisco Conservatory of Music an M.A. and B.A. degrees in musicology from UCSB. Her teachers include Peggy Norcross, Martial Singher, Margery McKay, Donald Stenberg, Judy Natalucci and Elizabeth Hynes. She is a Past President and Program Chair of the Los Angeles Chapter of the National Association of Teachers of Singing. She also teaches voice at her home in Oberlin, and is an avid equestrienne, gardener and student of Iyengar yoga.

Voice Type: Soprano
Music Styles Taught: Pop; Opera; Jazz; Folk; Classical; Musical Theatre
Availability: I am available as a performer; I am currently accepting private students; I am available as a clinician or presenter; I accept students through a college or university program