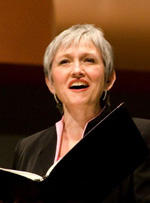 Susan Bender is a versatile soprano and teacher who has been featured as a soloist with orchestras and opera companies across the country, including the Metropolitan Opera Orchestra as a National Council Winner. For many years Ms. Bender lived in the Washington, DC area, where she was recruited to serve in the United States Navy Sea Chanter Chorus. She has appeared as a soloist with The Washington National Opera, Fairbanks Symphony, the Washington Bach Consort, the Graz, Austria Festival Orchestra, Iowa Bach Festival, Stony Brook Bach Festival (as an apprentice to soprano Beverly Hoch), and the 20th Century Consort.Internationally, she has performed in Southeast Asia for the United States Information Service, Greve, Italy for the Garth Newel Chamber Players and in Zagreb, Croatia as a presenter for the College Music Society. Ms. Bender's concert and oratorio work consistently receives high marks in a wide variety of repertoire including the works of Bach, Mozart, Vivaldi, Handel, Haydn, and Schubert. She is a leading interpreter of Libby Larsen's vocal works and has presented recital programs at major conferences celebrating the composer. She is recorded on the Naxos and Albany labels, and in her most recent recording of Gluck's Orphée with L'Opéra Lafayette, Opera News praised her as "a persuasive Diana." Her work on the stage included productions with Signature Theater and Gilbert and Sullivan operettas with Interact Theater, garnering her two Helen Hayes nominations from the Washington Theater Awards Association for the roles of Mabel in Pirates of Penzance and for Johanna in Sondheim's Sweeney Todd. Other roles include Norina in Don Pasquale, Susanna in The Marriage of Figaro, Poussette in Massenet’s Manon, Diana in Hippolyte et Aricie and Damigella in Monteverdi’s L'incoronazione di Poppea.

Professor Bender's former students have gone on to professional singing careers on Broadway and at the Metropolitan Opera, while current students continue to win awards at state and regional NATS competitions and land placements in prestigious summer and graduate programs. Recently, Professor Bender was among a handful of teachers selected to take part in Northwestern University's The Naked Voice Summer Vocal Institute with renowned pedagogue, W. Stephen Smith.