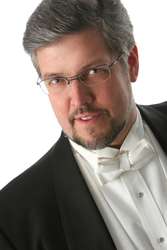 The 2010 recipient of the College of Fine Arts and Communication Excellence in Teaching Award, Mr. Chasteen is an Associate Professor of Music in Voice and the Vocal Area Coordinator. Primarily a teacher of classical voice technique, Terry spent a recent sabbatical studying the Estill Voice Technique to gain new perspectives in teaching classical singing and to gain technical knowledge for the teaching of Contemporary Commercial Music styles. Mr. Chasteen holds a Bachelor of Science degree in Music Education from West Virginia Institute of Technology and the Master of Music degree in Vocal Performance from the Indiana University School of Music. While completing his performance degree, Chasteen began his professional career that has taken him throughout the United States and to Austria, Germany and the Czech Republic. Active as both an operatic and concert soloist, he has performed with New Hampshire’s Opera North, Opera Theatre of St. Louis, Indianapolis Opera, Opera Memphis, Abilene Opera (TX), Longview Opera (TX), the West Virginia Symphony, the Huntington Symphony (WV), the Texas Baroque Ensemble, Plano Symphony (TX), Irving Symphony (TX), Valley Symphony Orchestra (McAllen, TX), and the Wausau Symphony (WI), and was heard in recital on Wisconsin Public Radio’s Live from the Elvehjem series. Local and regional performances include appearances with Opera Illinois, the Peoria Bach Festival, the Galesburg Community Chorus, Nova Singers (Galesburg), the McDonough Choral Society, and the Southeast Iowa Symphony. Five Songs from Christina Rossetti for tenor voice, clarinet, cello and piano, composed for Chasteen by composer and colleague, Paul Paccione, were recorded and distributed internationally by New World Records. A review of the work on Music Web International made note of the way in which the music was “sung with unforced expressiveness and an attractive tone by tenor Terry Chasteen,” while Fanfare magazine described his performance as “expressive and clear toned.”

In 2014, after spending four summer seasons as a guest faculty voice instructor, Mr. Chasteen was named the Coordinator of the Professional Training Program for Musical Theatre Interns in conjunction with Theatre West Virginia. His student's accomplishments at WIU include performing in lead roles in the University Opera Theatre main-stage and Opera on Wheels productions, as concert soloists with university ensembles, as winners of the School of Music Concerto Competition, as participants in international voice programs/seminars in Italy, Germany, and England (to date), and have been hired for professional engagements with Opera Illinois and the Muddy River Opera (Quincy). After completing degrees under his tutelage, students have been accepted into graduate programs at the Indiana University Jacob's School of Music, the University of Cincinnati’s College Conservatory of Music, the Manhattan School of Music, the Boston Conservatory, the New England Conservatory, and the University of Illinois School of Music

Voice Type: Tenor
Music Styles Taught: Opera; Classical; Musical Theatre
Availability: I am available as a performer; I have a wait-list for private lessons; I am available as a clinician or presenter; I accept students through a college or university program