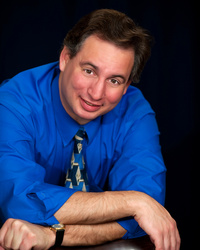 Title: Professor of Voice and Diction
Bio: Andrew White, baritone, is Professor of Voice and Diction at The University of Nebraska at Kearney. He holds a B.M., and M.M., as well as an Artist Diploma and D.M.A. from The Cleveland Institute of Music/Case Western Reserve University. Previously, he served on the voice faculties of Indiana University of Pennsylvania, University of Akron, Hiram College, Lake Erie College, Ashland University, and Baldwin-Wallace College Conservatory. A champion of Art Song and contemporary music, Andrew White has distinguished himself in recitals of French mélodie, Lieder, and contemporary American art song, including numerous premiere performances. He was selected to participate in the Cleveland Art Song Festival six times, appearing as a featured artist on the 1996 festival. He won the VARN competition in 1997 and was First Prize winner of the 1995 Richardson Awards Vocal Competition. While he was a student, Andrew White was granted a full scholarship to study in Switzerland with Gerard Souzay and Dalton Baldwin. In 1995, he made his New York recital debut in Weill Recital Hall of Carnegie Hall in a program devoted to the songs of Cleveland composer Frederick Koch. One review hailed him as "... a formidable interpreter ... Every song composer should be so lucky with collaborators." He has performed new works in concerts and on festivals in such cities as Boston, Cleveland, New York, San Francisco, and Vancouver. Opera and concert appearances include numerous roles with Lyric Opera Cleveland, The Oxford Shakespeare Festival, and as soloist with the Cleveland Chamber Symphony, Kalamazoo Symphony, Wooster Symphony, and Cleveland Orchestra at Blossom. Operatic appearances include Guglielmo in Cosi fan tutte, Endymion in Calisto, and Claudio in Beatrice and Benedict. Gilbert and Sullivan roles include Pirate King in The Pirates of Penzance, Pooh-bah in The Mikado, Grosvenor in Patience, and Lord Chancellor in Iolanthe. Roles in musicals include Herold Hill in The Music Man, Billy Bigalow in Carousel, and Emile de Becque in South Pacific. Roles in the legitimate theatre include Ben in The Dumb Waiter, Meyers in Witness for the Prosecution, and Cymbeline in Cymbeline. His ongoing studies of vocal pedagogy are numerous and varied, including the Oberlin Summer Institute with Richard Miller, the McClosky Institute of Voice, and Webster University’s Vocal Pedagogy Workshop with featured clinician Scott McCoy. He also holds a level III Certification in Somatic Voiceworktm: the LoVetri Method of CCM (Contemporary Commercial Music) Vocal Pedagogy. His article “Vocal Traditions: Somatic Voicework™ The Lovetri Method” was published in Voice and Speech Review in 2017, his article “Do Men Belt?” was published by Classical Singer Magazine in Fall 2016, his article “Belting As An Academic Discipline” was published in American Music Teacher in 2011, and his paper, "Towards an Understanding of Wagnerian Music-Drama" was published in Music Research Forum (1999).
Voice Type: Baritone
Music Styles Taught: Pop; Opera; Jazz; Folk; Rock; Classical; Musical Theatre
Availability: I am available as a performer; I am currently accepting private students; I am available as a clinician or presenter; I accept students through a college or university program