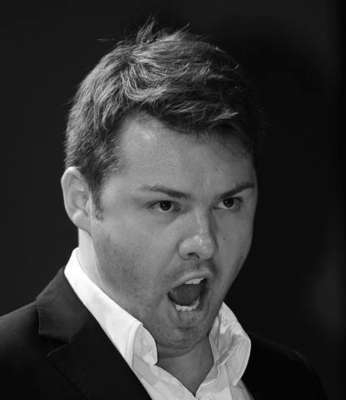 Title: Associate Professor of Vocal Music
Bio: Kerry J. Kuplic, baritone, is Associate Professor of Vocal Music at Dodge City Community College. He holds degrees from the University of Wisconsin-Green Bay and the Peck School of the Arts, where he studied with Kurt Ollmann. He gave his European debut with L’Opéra-Studio de Genève in the role of Marullo (Rigoletto) and in the title role in Franz Curti’s Reinhardt von Ufenau at the 2011 Festival Europa Musa in France. Kerry played pivotal roles in Jean Marie Curti’s Tic Tac Rousseau, which premiered in Geneva in late 2012. He has recently performed to acclaim with Grand Théâtre de Genève, OperaCoast (UK), Festival September Musicale (Switzerland), Estivales de Brou and Festival Musique au Paradis (France), The Milwaukee Symphony Orchestra, as well as concert, operatic, and recital engagements in the UK, France, Switzerland, Germany, Austria, and the US. He sings on the Florentine Opera’s Grammy Award-winning recording of Elmer Gantry. Kerry has conducted ensembles in Wisconsin, Texas, and Germany, and recently led a weeklong travel course to Italy for DC3 students. As acknowledgement of his dedication to international education and the preservation of cultural heritage, Kerry was named an expert of the Fondazione Romualdo del Bianco of Florence, Italy, in March of 2015. Kerry is the two year college R&R chair on the board of the Kansas Choral Directors Association.
Voice Type: Baritone
Music Styles Taught: Opera; Classical; Musical Theatre
Availability: I am available as a performer; I am currently accepting private students; I am available as a clinician or presenter; I accept students through a college or university program