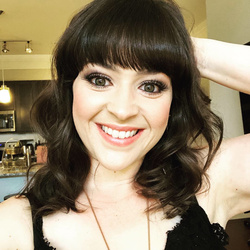 Title: Instructor of Voice, Lawson Academy of the Arts
Bio:

Greenville, South Carolina-based Mezzo-Soprano Laura Thomason holds a Bachelor of Music and a Master of Music in Vocal Performance from Converse College and Indiana University, respectively. An accomplished performer, she has been heard both in the United States and abroad in opera, concert, recital, and oratorio venues. Ms. Thomason has been a featured young artist with GLOW Lyric Theatre, the Bassi-Brugnatelli Symposium, Operafestival di Roma, and Harrower Summer Opera Workshop, and has appeared as a soloist in Handel’s Messiah, the Vivaldi Gloria, Mendelssohn’s Elijah, and the Saint-Saëns Oratorio de Noël. Her operatic experience includes the roles of Tessa in The Gondoliers, Betty Parris in The Crucible, the Sorceress in Purcell’s Dido and Aeneas, Charlotte in Massenet’s Werther, the Maestra delle Novizie in Puccini’s Suor Angelica, and Olga Olsen in Kurt Weill’s Street Scene, to name a few. Ms. Thomason has performed in numerous master classes and worked under the instruction of operatic masters such as Carol Vaness, Frederica von Stade, and Victoria Livengood.

Ms. Thomason maintains one of the largest and most sought after voice studios in the region. Her students consistently take both leading and supporting roles in local and regional theatre productions, have advanced to Regional and National NATS Competitions (National Association of Teachers of Singing) in both Musical Theatre and Classical divisions, and have been admitted for further musical and theatrical study by institutions such as The South Carolina Governor's School for the Arts and Humanities, AMDA, Pace University, The New York Conservatory for Dramatic Arts, The College of Charleston, Furman University, Anderson University, Wofford College, Belmont University, Liberty University, Presbyterian College, Interlochen Center for the Arts, and Converse College.

Ms. Thomason is also widely known for her work in children’s theatre; she has regularly served as Music Director for the Spartanburg Youth Theatre in Spartanburg, South Carolina. In six seasons, Ms. Thomason directed music for eight full shows and six summer camps, including Honk!, Jr., Junie B. Jones, the Musical, James and the Giant Peach, Jr., and Seussical, Jr., and Broadway Bootcamps: Wicked, Grease, and Hamilton. In the summer of 2020, Ms. Thomason will join the summer voice faculty of the Fine Arts Center, located in Greenville, SC. She will be teaching vocal technique for the young singing actor to students in grades 4-8.

Voice Type: Mezzo-soprano
Music Styles Taught: Pop; Opera; Jazz; Folk; Classical; Musical Theatre
Availability: I am available as a performer; I am currently accepting private students; I am available as a clinician or presenter; I offer lessons in a group environment; I accept students through a college or university program