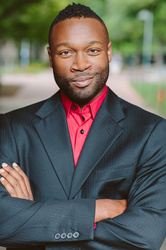 Title: Assistant Professor
Bio: Carl DuPont, bass-baritone, most recently performed as Bob Becket in H.M.S. Pinafore at Opera Saratoga while in the young artist program there. Prior to that he received 4th place in the Florida Suncoast Opera Guild competition. His latest roles include Papageno in The Magic Flute, Taxi Black in One Touch of Venus with the Oper Leipzig, as well as, the title role of Don Giovanni with Capitol Heights Lyric Opera. Important debuts in his career were Ramfis in Aida with Cedar Rapids Opera, Plutone in the Bloomington Early Music Festival’s production of L’Orfeo, and his Carnegie Hall debut singing Handel with Ton Koopman. Carl joined the Pine Mountain Music Festival as Geronimo in Cimarosa’s Il Matrimonio Segreto also covering the role of Lord Talbot in Verdi’s Giovanna D’arco as an apprentice at Sarasota Opera. As a concert musician, Carl has performed bass solos with the Miami Bach Society, the Ebony Chorale, and Park Avenue Christian Church. His work as an ensemble member has taken him to Hong Kong, Leipzig, Tel Aviv and Salzburg. He received a Bachelor’s degree from Eastman School of Music and a Master’s degree from Indiana University and was awarded Performer’s Certificates at both institutions. He pursued doctoral studies at the Frost School of Music as a recipient of the prestigious University of Miami Fellowship and is now Assistant Professor at the Peabody Conservatory of Johns Hopkins.
Voice Type: Bass-Baritone
Music Styles Taught: Pop; Opera; Gospel; Classical; Musical Theatre
Availability: I am available as a performer; I am currently accepting private students; I am available as a clinician or presenter; I accept students through a college or university program