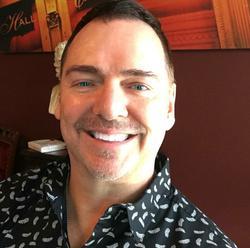 Title: Voice Teacher/Vocal Coach
Bio: The son of a Southern Baptist preacher, Jeff Alani Stanfill was born in Brownsville, Tennessee and raised in Memphis. His mother, a now retired elementary school teacher, encouraged his love of music and art, while his father guided him in spiritual development and a great appreciation for gospel music. Jeff sang in church choirs from an early age. He sang his first public solo on the radio at age eight, with his rendition of “Climb Every Mountain,” from the “Sound of Music.” Music was the focus of Jeff’s early life until he became involved with the riding and training of show jumping horses. Jeff toured the National Horse Show circuit until he was 18, at which point he realized that his talents were better served in music. Jeff pursued a degree in vocal performance from Florida State University, and later attended New England Conservatory of Music in Boston. Although his time at F.S.U. and N.E.C. was focused on Classical music training, Jeff also explored other genres of music including Musical Theater, Pop, and R&B. Jeff became a frequent soloist in the Boston area. He also performed in various productions such as the “Gondoliers at the Boston Public Theater” and the “Pirates of Penzance.” Later, Jeff performed in summer stock productions at the Buck’s County Playhouse, in New Hope, PA and eventually landed several contracts with Jean Ann Ryan Productions aboard Norwegian Cruise Lines ships. During the long contracts at sea, he began to expand his musical repertory by exploring new genres of music, Salsa and Latin Pop along with his rigorous schedule with Jean Ann Ryan Productions, which included eight shows a week. Jeff with Maestro David Jones In 1999, Jeff began his long association with Maestro David L. Jones in New York. Mr. Jones’ unique ability to help the singer understand the fundamentals of singing, as well as his knowledge of a vast array of exercises which create balance, beauty, and breadth of tone, helped Jeff develop a solid foundation to re-build his voice upon. Maestro Jones’ technique also helped Jeff achieve versatility of sound. He can easily shift from a Classical sound to a Pop sound, or even a Rock or R&B sound with very little effort. Jeff is able to endure a rigorous performing schedule singing music from practically every genre. Jeff began teaching voice soon after he mastered the concepts of the Swedish-Italian school of singing learned from Maestro Jones. He found that the vocal ability of his students progressed rapidly through the use of this amazingly healthy technique. Many of his current and former students now perform in national Broadway tours, in production shows located in Las Vegas and Atlantic City, as well as on cruise ships throughout the world. Today Jeff maintains a very busy schedule teaching singers at his studios in New York City, West Orange, New Jersey and his online studio which reaches singers in all parts of the globe. In September of 2017 Jeff taught a joint masterclass with internationally renowned, Grammy/Dove award winning tenor David Phelps at the Ripley Grier Studios in New York City. This exciting class was designed to teach singers from the genres of pop, rock, R&B, opera and gospel the concepts and exercises from the Swedish/Italian vocal technique and to share Mr. Phelps secrets for maintaining a successful 25 year career and long term vocal health. In addition to teaching voice in 3 studios located in New York City, West Orange, New Jersey and Fair Lawn, new Jersey, Jeff maintains a busy performing schedule singing with his band The Savoy Stompers as well as being the tenor section leader at Christ Episcopal Church in Glen Ridge, New Jersey. To contact Jeff about voice lessons in person or via Skype, please write him at jeff@voicesoaring.com
Voice Type: Tenor
Music Styles Taught: World; Pop; Opera; Jazz; Gospel; Rock; Classical; Musical Theatre
Availability: I am available as a performer; I am currently accepting private students; I am available as a clinician or presenter; I offer lessons in a group environment; I accept students through a college or university program