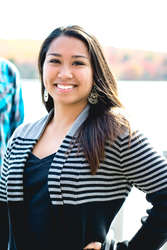 Bio: Hannah Faye Huizing grew up in New Milford, New Jersey, right across the river from New York City, where her love for the performing arts and music education was sparked. In 2012, she graduated from Messiah College with a Bachelor of Music in Vocal Performance. Upon graduation, took the stage as Mama Noah in Children of Eden at the Bergen Performing Arts Center and later became the vocal and choral teaching artist for their Performing Arts School. She also had the honor to sing in Songs For A New World with the New Vision Players and Donizetti’s Don Pasquale with Amore Opera in NYC. While at the BergenPAC, she directed the BergenPAC Voices for performances with Video Games Live and twice for Kenny Rogers’ Hits and Christmas Concert. Giving back to her alma mater of New Milford High School, she has coordinated benefit concerts, taught musical theater/singing through acting workshops, and conducted the pit for their production of The 25th Annual Putnam County Spelling Bee in 2013. She also taught general music and choir at Eastern Christian Middle School in Wyckoff, NJ. Upon moving to the East End of Long Island, she served as a Teaching Artist for Westhampton Beach Performing Arts Center. In 2016, she was one of 25 singers in the nation to advance to the Semifinals in the National Musical Theater Competition held by the National Association of Teachers of Singing. Hannah Faye established sole proprietorship of Huizing Voice Studio where she is the primary instructor, teaching voice and piano. Alongside her husband, Josh, she sings and plays on the music team at Grace Presbyterian Church. She and Josh also perform concerts as a musical duo at wineries, coffeehouses, and events. Their favorite collaboration was with East End favorites Jane Hastay and Peter Martin Weiss to produce Wish Upon A Star: Melodies from the House of Mouse in East Hampton. They also sing with the Choral Society of the Hamptons and have had the joy to be featured soloists in Mozart’s Missa Brevis in F. When she isn’t teaching or performing, she serves as the Administrative Director of the Choral Society of the Hamptons.
Voice Type: Soprano
Music Styles Taught: Opera; Jazz; Classical; Pop; Musical Theatre
Availability: I am available as a performer; I am currently accepting private students; I offer lessons in a group environment