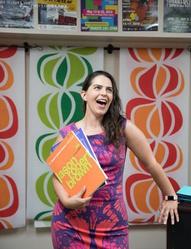 Find AvidDiva Music on Facebook for the latest updates! https://www.facebook.com/AvidDivaMusic/

2019 Update: Naomi adjudicated Classical and Pop/Folk vocal classes at the Brooks Music Festival in Brooks, Alberta, and found her first major adjudication opportunity extremely rewarding! A quote from a parent: “As a child I also participated in the music festival for many years. I have never seen such a special adjudicator. Ms. Williams took time to talk with each student, she provided insightful feedback and gave such great hands-on tools that we could take home to our lessons. She was encouraging while pushing the students to do even better. She has a clear love for music and was able to share that with all the students.” Naomi retired from singing in cover bands to concentrate on building her teaching business, and her renewed focus on her teaching and students continues to elevate her students, their singing, and their confidence. 2018 Update: Naomi’s studio graduates continue to thrive - one student to study Theatre Arts at Grant MacEwan University, and another to the National Theatre School of Canada to study Acting. Two of her students were awarded top marks in Calgary for their RCM voice examination marks. Many others were awarded roles in local theatre productions. Her studio offered more opportunities to build community and growth for her students via performance, at her twice yearly studio recitals, Christmas carolling (including a live TV debut on CTV Calgary Morning!), and other public performances throughout the year. 2017 Update: Naomi sent her first student off to study voice at the Undergrad university level (McGill), and performed as The Warden in Cowtown Opera's Prison Divas. She also began teaching RCM Theory lessons.

2016 Update: Naomi was chosen as one of 14 North American recipients of the NATS Joan Frey Boytim Independent Teacher awards, and joined the Calgary Youth Singers as their Kids & Music Coordinator! She also coached her first student to a voice competition at the Provincial level, where he was awarded second place in the classical Boys 16 & Under category. Naomi also worked with the Mount Royal University Conservatory as a choral clinician.

Naomi Williams is a performer and vocal instructor who believes everyone has a voice that deserves to be heard. She is passionate about helping others on their path towards vocal confidence, health, strength and beauty. Naomi teaches beginner to advanced vocalists of all ages, and is skilled at adapting her teaching style to her student, their level of ability, and the music they want to learn. Naomi's qualifications are comprised of her own experiences as a young adult in choirs, rock bands, musical theatre, vocal jazz, and classical vocal training, followed by a degree in Voice Performance from Wilfrid Laurier University (Waterloo, Ontario), and then professional and volunteer experience post-grad in Musical Theatre, Opera, Rock/Pop and Musical Direction. She currently makes her living full-time as a voice teacher and a performer. Naomi understands the career paths of singers in the classical/opera world, popular music, and musical theatre. She uses her knowledge and networks to help guide her students towards their personal vocal goals. If her students choose to participate in recitals, festivals, exams, auditions, and open-mics they are well-supported, ensuring that the experience is positive and successful.

Naomi has worked as a clinician and adjudicator for Storybook Theatre, NATS Calgary, and Sham-Rock-Star. She is also a member of the Canadian Federation of Music Teachers' Association (CFMTA). From 2011-2016 she worked for Morpheus Theatre’s Gilbert & Sullivan Jr. Program as the resident Musical Director/Vocal Coach

Naomi is an active volunteer in Calgary’s Community Theatre scene (Calgary ACTS) and performed lead roles with Morpheus Theatre, Front Row Centre, Cappuccino Musical Theatre, and Scorpio Theatre, winning awards and recognition for several of her performances. She later branched out into Musical Direction, winning an award for her work as musical director and conductor for Spamalot in 2013 with Front Row Centre.

Voice Type: Soprano
Music Styles Taught: Pop; Opera; Jazz; Folk; Rock; Classical; Musical Theatre
Availability: I am available as a performer; I have a wait-list for private lessons; I am available as a clinician or presenter; I offer lessons in a group environment