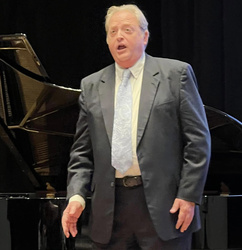 Michael Hendrick, DMA Associate Professor of Music, University of Mobile Dr. Michael Hendrick joined the faculty of the University of Mobile in 2022. A Georgia native, Michael Hendrick sang as a full-time operatic tenor throughout the U.S. and internationally for over 25 years, including leading roles at the Metropolitan Opera, New York City Opera, Lyric Opera of Chicago, Los Angeles Philharmonic, London Philharmonic Orchestra, and the National Orchestra of Spain, among many others. He was named Washington National Opera's 2001 Artist of the Year at The Kennedy Center for his portrayal as Lennie Small in Carlisle Floyd's Of Mice and Men.

Most recent highlights include being selected as a member of the 2020 NATS Intern Program for voice teachers; singing the U.S. national anthem, The Star-Spangled Banner, at his own 2021 graduation from Louisiana State University with the Doctor of Musical Arts degree. In 2022, Dr. Hendrick gave a homecoming concert in his hometown of LaGrange, Georgia; And he performed the song "As night and morning meet" by Ellen Gilson Voth, at the NATS 57th National Conference in Chicago in July 2022.

Dr. Hendrick earned the Master of Music in Voice Performance in 1991, and the Artist Diploma in Opera Performance in 1993, both from the University of Cincinnati College-Conservatory of Music, and his Bachelor of Music in Music Education from Berry College in 1989. He spent the following summer of 1989 as a member of The Lake Junaluska Singers under the direction of renowned Dr. Glenn Draper, performing in December 1989 for President George H.W. Bush and First Lady Barbara Bush at the White House.

Availability: I am available as a performer; I am currently accepting private students; I accept students through a college or university program