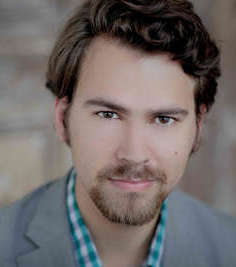 Praised as "an already mature artist with a voluminous sound," Baritone and composer Joel Balzun is establishing himself as a mature new voice in the future of music. His multi-faceted career has led him to work with some of the world’s most respected musicians and ensembles.

A recent winner of the Gwendolyn Roberts Young Artist Auditions, Mr. Balzun has appeared successfully on both the operatic and concert stages. Mr. Balzun made his solo debut at the Kennedy Centre in 2014, singing excerpts from Turandot. As a 2016 fellow at the Tanglewood Music Center, Mr. Balzun sang alongside Stephanie Blythe in a concert of American song, and Dawn Upshaw and Sanford Sylvan in Shostakovich's brooding Symphony No. 14. Other past appearances include the title role in Don Giovanni, the Four Villains in Les contes d'Hoffmann, "Marcello" and "Schaunard" (La bohème), "Prince Yeletskiy" and "Count Tomskiy" (Pikovaya Dama), "Albert" (Werther), "Belcore" (L'elisir d'amore), "Dr. Malatesta" (Don Pasquale), "Valentin" (Faust), "Sid" (Albert Herring), and "John Brooke" (Little Women, M. Adamo), among others. On the concert stage, Mr. Balzun has been a featured soloist in Copland's Old American Songs, Dvořák’s Te Deum, Fauré's Requiem, Haydn's The Creation, Mahler's Lieder eines fahrenden Gesellen, and numerous cantatas of Bach. His acclaimed performance of Bach's Johannes-Passion with the Rochester Bach Festival was broadcast multiple times across the United States.

An avid proponent of the music of living and contemporary composers, Mr. Balzun won critical acclaim for his portrayal of the titular "Joseph de Rocher" in the South Florida premiere of Jake Heggie's Dead Man Walking with Miami Music Festival. He worked with the composer on this work, as well as the role of "Charlie" in excerpts from Three Decembers. On the concert stage, he has championed rarely-performed works such as George Rochberg's String Quartet No. 7, as well as Peter Maxwell Davies' virtuosic Eight Songs for a Mad King, and numerous performances of Robert Denham's Sutter Creek, among others. In 2014, Mr. Balzun was a featured soloist at the CFAMC National Conference, where he gave the world premiere performances of works by Christopher Ashbaugh, David Fuentes, Jan Mittelstaedt, and Benjamin Williams. His professional debut in 2011 was in the world premiere of Peter Michael von der Nahmer's award winning opera, El canguro with California International Theatre Festival.

Also an accomplished composer, Mr. Balzun's “haunting and beautiful” music has received international recognition. He recently was a multiple prize-winner in the 2017 SOCAN Foundation Awards for Young Composers. In 2014, he was named a finalist for the prestigious ASCAP Morton Gould Young Composers Awards. Other accolades include winning the Dallas Wind Symphony’s 9th annual “Call for Fanfares”, as well as winning first prize in the Classical Marimba League International Composition Competition. In 2010, Mr. Balzun was also a prize-winner in the National Broadcast Orchestra’s Galaxie Rising Star Composers’ Competition, winning both the Young Composers Prize and the Grand Prize. In 2012, he was the youngest composer invited to participate in the Art Song Lab through the Vancouver International Song Institute. He was a guest presenter and composer at the CBDNA 2013 National Conference in Greensboro, North Carolina, as well as the 2014 CFAMC National Conference, where he was also a featured soloist.

Praised as “a composer to watch” by the Calgary Herald, Mr. Balzun has been the recipient of numerous commissions. His music has been performed in Canada, the United States, Costa Rica, and Taiwan, by ensembles such as Alberta Winds, Calgary Civic Symphony, Calgary Philharmonic Orchestra, CCM Wind Orchestra, Dallas Wind Symphony, the National Broadcast Orchestra of Canada, La Orquestra Vientos de Costa Rica, and Windago. Additional performances include those by Cadillac Moon Ensemble, Standing Wave Ensemble, and other luminary soloists. His music has been broadcast on CBC Radio 2 and Espace Musique. A selection of Mr. Balzun’s music is currently published by C. Alan Publications and Lovebird Music. He is an active member of ASCAP, CFAMC and SOCAN.

Mr. Balzun studied Music Composition and Vocal Performance at University of Calgary, Biola University, and the Eastman School of Music, where he earned his Master's degree under the tutelage of Jan Opalach and Benton Hess. At Eastman, he was the only Master's student awarded an applied teaching assistantship for secondary voice lessons; he was subsequently nominated for the Teaching Assistant Prize for Excellence in Teaching. He has augmented his studies as a fellow at the Tanglewood Music Centre, where he was primarily mentored by Sanford Sylvan, and Pittsburgh Festival Opera as a Featured Artist in the Young Professional Artists program, where he was also in Jane Eaglen's inaugural class of the Mastersingers Project for Young Dramatic Voices. He has studied composition with Robert Denham, David Eagle, Laurie Radford, and Christopher Wills; and voice with Reid Bruton, William Lock, and Michelle Minke.

Mr. Balzun currently serves on the voice faculties of Biola University and Fullerton College. In addition to teaching voice lessons at both institutions, Mr. Balzun also teaches group voices classes and Song Literature. He previously served as the vocal coach and rehearsal pianist for Biola Opera at Biola University, as well as the director of the Opera Scenes Workshop. His students have gone on to receive admissions to numerous undergraduate and graduate music programs across the country, as well as numerous summer training programs. http://www.joelbalzun.com/

Voice Type: Baritone
Music Styles Taught: Opera; Jazz; Classical; Musical Theatre
Availability: I am available as a performer; I am currently accepting private students; I am available as a clinician or presenter; I accept students through a college or university program