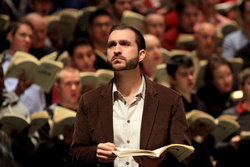 Title: Voice Teacher
Bio: Baritone Daniel Collins has performed at Carnegie Hall and with the Metropolitan Opera chorus in New York City. He received his Bachelor of Music degree in Vocal Performance from the University of North Texas and earned both his Master of Music and Doctor of Music degrees in Vocal Performance from Florida State University. Dr. Collins was a finalist in the Dallas and El Paso Opera Guild Competitions, the NATS Singer of the Year Competition, and the NATSAA National Competition. He has performed in opera, concerts, and recitals throughout the United States and as a soloist at some of the most prestigious churches and synagogues in New York City and Washington, D.C. Dr. Collins was described by Tim Page with the Washington Post as a “funny, exuberant, and enormously likable” Papageno during Summer Opera Theater’s performance of The Magic Flute. The Post also celebrated him in Opera Theater of Northern Virginia’s The Barber of Seville as a “bright and bouncy” Figaro who delivered his lines with “aplomb.” He was a young artist in the studio programs of Portland Opera, Kentucky Opera, and El Paso Opera. Dr. Collins has sung the roles of Sharpless in Madama Butterfly, Sid in Albert Herring, Figaro in The Marriage of Figaro and in The Barber of Seville, Papageno in Die Zauberflӧte, Belcore in L’elisir d’amore, Jupiter in Orphée aux enfers, Dr. Falke in Die Fledermaus, Bottom in A Midsummer Night’s Dream, Masetto in Don Giovanni, Schaunard in La Bohème, Clayton McAllister in Cold Sassy Tree, the Clock in L’Enfant et les Sortilèges, the Mandarin in Turandot, and Haushofmeister in the world premiere of Dorian Gray. Dr. Collins has had the pleasure of singing in the choruses of the Metropolitan Opera, Washington National Opera, and Fort Worth Opera. He has performed roles with the American Symphony Orchestra at Carnegie Hall, Kentucky Opera, El Paso Opera, Summer Opera Theater, Bel Cantanti Opera, Amarillo Opera, Crested Butte Opera, Portland Opera To Go, Opera Southwest, Opera Theater of Northern Virginia, Concert Royal, Ash Lawn Opera, Bay View Music Festival, and Seagle Music Colony. Dr. Collins maintains a private voice studio at the National Opera Center in New York City where he teaches singers of all skill levels including those who perform on Broadway and at the Metropolitan Opera. He has a passion for vocal instruction and is dedicated to the success of each individual student. Dr. Collins keeps an active record of each student’s progress, vocal exercises, repertoire, performances, and personal goals. He is a member of the College Music Society, the American Guild of Musical Artists, the National Association of Teachers of Singing, the Music Teachers National Association, Pi Kappa Lambda, and Opera America. Dr. Collins is currently on the voice faculty at the University of North Carolina at Chapel Hill.
Voice Type: Baritone
Music Styles Taught: Opera; Classical; Musical Theatre
Availability: I am available as a performer; I am currently accepting private students; I am available as a clinician or presenter; I offer lessons in a group environment; I accept students through a college or university program