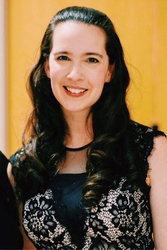 Title: Assistant Professor of Voice, Director of Lyric Theatre
Bio: Amanda Cox is an instructor of voice at Houghton College and the Director of Music and Worship at the Houghton Wesleyan Church. She is a graduate of the University of Miami, where she studied voice with Dr. Esther Jane Hardenbergh, and received her Master of Music degree in May 2003. That summer, Amanda attended the University of Miami Salzburg Program in Salzburg, Austria. In April of 2003, she won the Pinellas Opera League Scholarship Competition in Tampa, Florida, and played the role of the Queen of the Night in the University of Miami’s production of Mozart’s The Magic Flute. She was also seen as the soprano soloist in the Christmas 2002 production of Handel's Messiah with the Miami Civic Chorale and Orchestra. Amanda was heard in recital at the spring 2003 conference of The College Music Society, performing new music by Dr. Dennis Kam. In 2002 she premiered the role of Violetta in Thomas Sleeper’s new opera Small Change. Amanda received her undergraduate degree from Houghton College in 2001, where she studied voice with Dr. Ben King, and played the roles of Lucy in Menotti's The Telephone, Sister Angelica in The Three Hermits by Stephen Paulus, and Angelica in Moliere’s farce The Imaginary Invalid. Amanda is also active in community theatre, having most recently played the roles of M’Lynn in Steel Magnolias and Amalia in She Loves Me with The Valley Theatre, and the role of Maria in The Sound of Music with The Short Tract Town Theatre. Amanda and her husband Mike have two precious children, an eight-year-old daughter named Evelyn, and a three-year-old son named Grayson.
Voice Type: Soprano
Music Styles Taught: Pop; Opera; Gospel; Classical; Musical Theatre
Availability: I am available as a performer; I have a wait-list for private lessons; I accept students through a college or university program