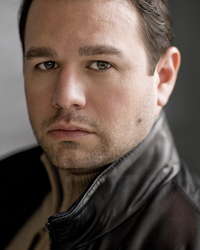 Title: Adjunct Faculty, Voice--DePaul University, North Park University, Silver Lake
Bio: Bass-baritone Sam Handley has been praised for “his rich, burnished” voice and the “genuine emotional depth of his characterizations.” As a member of Lyric Opera of Chicago's Ryan Opera Center, he performed more than a dozen roles, including Quince in Britten’s A Midsummer Night’s Dream and Tom in Un ballo in maschera. After appearing in Il trittico at the Castleton Festival, he returned to sing Colline in La bohème with Lorin Maazel. Charles Ward of The Houston Chronicle has described his “vivid and polished singing” as “. . .leaving the audience panting. . .” On the symphonic stage, his deep repertoire encircles masterworks of Handel, Haydn, Bach, Beethoven, Stravinsky, Vaughan Williams, and Mozart, in whose Requiem Handley has been described as “striking in the tuba mirum.” In the current season, Mr. Handley performs the role of Konrad Nachtigall in Die Meistersinger von Nürnburg with the San Francisco Opera. He sang the Sprecher in Opera Colorado’s production of The Magic Flute, and on the concert stage he performed as soloist in a concert performance of Roger Waters’ opera Ca Ira with the Nashville Symphony, both in the 2014-15 season. With the Atlanta Opera, he sang Basilio in their production Il barbiere di Siviglia. He recently made his European debut (as well as his role debut) as Escamillo in a new production of Carmen with Theater Aachen. He returned to the Lyric Opera of Chicago for their production of Die Meistersinger von Nürnberg as Hans Folz. Mr. Handley made his Asian debut in Beijing at the National Centre for the Performing Arts as Basilio in Il barbiere di Siviglia, conducted by Lorin Maazel. He made his Severance Hall and Carnegie Hall debuts with The Cleveland Orchestra in performances of Salome with Franz Welser-Möst. Recent concert engagements included a return to the Santa Fe Symphony for Handel’s Messiah, and added the Requiems of Verdi and Brahms plus Mendelssohn’s Elijah to his repertoire.
Voice Type: Bass-Baritone
Music Styles Taught: Opera; Classical
Availability: I am available as a performer; I am currently accepting private students; I am available as a clinician or presenter; I accept students through a college or university program