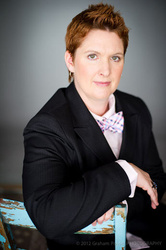 Vicki St. Pierre’s warm, lush voice “invitingly combines clarity of expression and beauty of tone,” and is described as “rich with both a darkness and brightness.” Past concert highlights include Beethoven’s Ninth Symphony with the Toronto Philharmonic Orchestra, Monteverdi’s Vespers of 1610 with the Toronto Consort, Zelenka’s St. Cecilia Mass with Tafelmusik, Stanford’s Requiem with the Orpheus Choir, Bach’s Magnificat with the Toronto Bach Consort, and Handel’s Messiah with Symphony Nova Scotia, the Edmonton Symphony, and the Calgary Philharmonic Orchestra, Tafelmusik, Victoria Symphony, Handel’s Dixit Dominus with Tafelmusik, and the music of Jommelli with Les Idées Heureuses of Montreal. On the operatic stage, Vicki has appeared in Monteverdi’s Orfeo, Charpentier’s Actéon, and Monteverdi’s Il ritorno d’Ulisse in Patria with Opera Atelier, Dido and Aeneas with Ensemble Masques de Montreal and Toronto Masque Theatre, Rossini’s Il Barbiere di Siviglia with Toronto Philharmonia, and L’Incoronazione di Poppea with Opera Atelier, Cleveland Opera and Early Music Vancouver. Recent and upcoming engagements include the role Nutrice in Monteverdi’s L’Incoronazione di Poppea with the Academy of Ancient Music in London, UK, the role of the Sorceress in Purcell’s Dido and Aeneas with Les Violons du Roy at Carnegie Hall, Messiah with Orchestra London, Pergolesi’s Stabat Mater with 13 Strings and Splendors of the Emperor’s Chapel with The Toronto Consort. Vicki adjudicates music festivals and competitions, was Director of Music at the Cathedral Church of St. James in Toronto, taught voice at Wilfrid Laurier University, conducts an auditioned community choir, was the music director for the New Hamburg Live! festival of the arts, was a lecturer at the Royal Conservatory of Music, has been an assistant conductor with Opera Atelier, and most recently, was on faculty at COSI, a summer opera training program in Sulmona, Italy. She recently completed her doctoral studies in performance at the University of Toronto under the tutelage of Dr. Darryl Edwards.