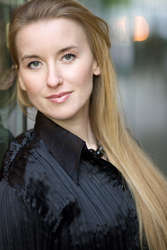 Jeanai La Vita is a dedicated and highly effective voice instructor and performer who has appeared with leading companies such as New York City Opera, Boston Lyric Opera and the Ravinia Festival. A member of AGMA and Actors’ Equity Association, Jeanai has performed in broadway musicals with Patti LuPone, Audra McDonald, Michael Cerveris and has worked directly with Stephen Sondheim, earning his direct praise in her performance of his musical, Anyone Can Whistle.

Jeanai La Vita has over 18 years of teaching and directing experience. Jeanai is a true mentor and takes great interest in guiding and supporting her students, while building their strengths and abilities to their fullest potential. Jeanai's teaching style is positive, energetic and engaging, while instilling technique that is specific and focused on precision and fluidity. She is an expert at teaching solid vocal technique capable of serving diverse musical styles. Jeanai prides herself on working with students of all ages and voice types and helping them all rise to their highest potential. She is very goal driven in her approach to the progress of students, while ensuring solid preparation and building confidence every step of the way. Jeanai will encourage and help you find appropriate performance and audition opportunities throughout your course of study. In addition to being very passionate about educating people to become excellent singers, she is also committed to helping students become competent musicians and incorporates music reading and sight-singing education into everyone's lessons. Jeanai's students consistently win 1st, 2nd and 3rd places in major national competitions in Classical and Musical Theatre divisions in the Classical Singer Competition, Hal Leonard Competition and NATS North East Regional, NY and NJ, to name a few. Her students obtain the highest scores at NYSSMA. Jeanai's students are also frequently featured in productions throughout the community and in their schools in leading roles and have been admitted to and received large scholarships to highly competitive programs, universities and music schools, including Juilliard. Jeanai is currently on voice faculty and directs the Youth Chorus at Manhattan School of Music in the Precollege division. She previously directed the musical theatre program and served on the voice faculty in Manhattan School of Music’s summer youth program. Jeanai was on faculty at Music Conservatory of Westchester from 2012-2017, where she was a member of the voice faculty, theory faculty, directed the Musical Theatre Program and Youth Chorus during the school year and during the summer Music and Arts Program since 2012. Jeanai La Vita represented the Voice Department on MCW’s Faculty Council from 2013-2015. Jeanai has also been a member of the voice faculty at Mercy College. She has also directed youth programs in Florida at American Stage and the Children’s Home of Tampa Bay. Jeanai La Vita currently maintains a thriving private voice studio in New York and New Jersey. A winner and finalist in major international competitions, Jeanai La Vita received her Master’s degree in Classical Vocal Performance from Manhattan School of Music and is a classically trained dancer, actor and athlete. Jeanai's vast expertise and mastery of foreign languages, with fluency in French, German and Italian, distinguish her as a first class performer and highly sought after instructor. www.Jeanai.com

Voice Type: Soprano
Music Styles Taught: World; Pop; Opera; Jazz; Folk; Gospel; Rock; Classical; Musical Theatre
Availability: I am available as a performer; I am currently accepting private students; I am available as a clinician or presenter; I offer lessons in a group environment