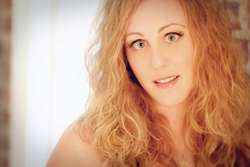 Bio: Soprano VICTORIA BROWERS is a versatile singer who is at home in various musical styles from Monteverdi to the music of her contemporaries. She has been heard in concerts singing the songs of Stravinsky and Rimsky-Korsakov at the Roerich Museum in NYC, as well as in a concert featuring the music of Libby Larsen at Zipper Hall in LA. She has performed in recital with flutist, Randolph Bowman and pianist, Rosemary Hyler Ritter in both Delaware and Oxford, OH. She has also been heard in various opera roles including the Governess in The Turn of the Screw at Stony Brook University, Musetta in La Bohème with St. Petersburg Opera and the in the role of Nittilai in the world premiere of Vanraj Bhatia's opera Agni Varsha in Jackson Heights, Queens. Victoria was a National Finalist in the NATS Artist Award Competition and was awarded the Berton Coffin Award for her performance in the finals. She received an encouragement award from the Gerda Lissner Foundation in NYC. In 2016 she was a semifinalist in both the Zinka Milanov International Competition in Croatia, as well as the Cooper-Bing Competition with Opera Columbus in Ohio. She has performed with Chelsea Opera, Princeton Symphony Orchestra, Natchez Opera, Wintergreen Music Festival, The Britten-Pears Young Artist Programme, The Garden State Philharmonic, NJ Bach Festival, and Empire Opera. Roles include Parasha in Stravinsky’s Mavra, Younger Alyce in Cipullo’s Glory Denied, Susanna in Le nozze di Figaro, Marzelline in Fidelio, Gretel in Hansel and Gretel and Norina in Don Pasquale. She has also been a soloist in numerous Bach cantatas, Haydn’s Creation, Handel’s Messiah, Mozart’s Vesperae Solennes de Confessore, and Mendelssohn’s Elijah. As both a scholar and performer of art song as well as new music, Ms. Browers has participated in, and is currently on the faculty, of the SongFest Program in California. At Songfest, she has worked with such artists as Martin Katz, Graham Johnson, Rosemary Hyler, Paul Sperry, Amy Burton, Lisa Saffer, Frances Bennett and Randolph Bowman. She has also collaborated with composers Tom Cipullo, Lori Laitman, and John Musto. Ms. Browers received a Bachelor of Music in Vocal Performance from Ohio Wesleyan University, a Master of Music Degree in Vocal Performance and Pedagogy from Westminster Choir College, and a Doctor of Musical Arts Degree in Vocal Performance from Stony Brook University. She is currently Adjunct Assistant Professor of Voice at Westminster Choir College and Adjunct Professor of Voice and Opera at Frostburg State University.
Voice Type: Soprano
Music Styles Taught: Opera; Folk; Classical; Musical Theatre
Availability: I am available as a performer; I am currently accepting private students; I accept students through a college or university program