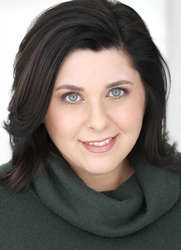 One of America’s most distinguished dramatic-coloratura sopranos, Dr. Amanda Pabyan has been described by the New York Times as “a brilliant coloratura” and “technically agile, clarion toned and incisive.” Ms. Pabyan made her Metropolitan Opera debut as the Queen of the Night in Mozart’s Die Zauberflöte under the baton of James Levine. She also appeared in operatic productions throughout the United States and abroad. Notable American appearances include Boston Lyric Opera, New York City Opera, Washington National Opera, Opera Colorado, Florida Grand Opera, Santa Fe Opera, Glimmerglass, and the Dallas Opera. Additionally, Dr. Pabyan has appeared in concert with the Boston Pops, Cincinnati Symphony, American Symphony Orchestra, National Symphony of Guatemala, and the Folle Journée Festival Orchestra on tour in Japan.

A professional performer for the past 13 years and an instructor of voice for 9, Dr. Pabyan has helped to prepare dancers and actors for Broadway and off-Broadway musical theater auditions, train students for competitions and college auditions, taught musical theater belting techniques alongside classical operatic techniques to college students, and helped high school students prepare for their musical productions. In preparing students for musicals, Dr. Pabyan supports their development into a fully integrated singing-actor, with the ability to use their dramatic training to enhance their performances unimpeded by the process of singing. Dr. Pabyan holds a Bachelor of Music degree in Voice from Rutgers University’s Mason Gross School of the Arts, a Masters Degree in Vocal Performance from Boston University’s College of Fine Arts, and a Doctorate from the College-Conservatory of Music at the University of Cincinnati. Dr. Pabyan has made a recording of Italian Cantatas and German Arias, "Nel dolce dell'oblio”, with Callisto Records, available on iTunes and Amazon. She is currently a Lecturer in Voice for Central Michigan University.