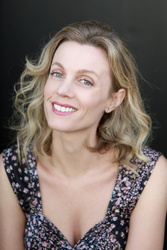 Amanda is a professional singer, dancer, actress and private vocal coach. Originally from southern California, she has been featured in musical theatre, plays, television, and has spent the last 10 years performing all over the world. ​

Amanda has performed for crowds of up to 7,000 people at the Wolf Trap outdoor amphitheater in Washington, D.C., Redlands Bowl in southern California, and at The Rose Bowl stadium in Pasadena, California where she was selected to sing the National Anthem.

She's performed in other notable venues such as; The Fabulous Fox Theatre in St. Louis, the Verizon Theatre in Texas, Segerstrom Center for the Arts in Orange County, the Cobb Energy Performing Arts Centre in Atlanta, the Adrienne Arsht Center for the Performing Arts in Miami, Hard Rock Casino & Hotel Seminole, Mystic Lake Casino, the Taj Mahal Casino in Atlantic City, and at the Coliseo De Puerto Rico, in Puerto Rico. Amanda graduated with honors from California State University, Fullerton with her Bachelors degree in Theatre Arts. During that time she trained in voice, dance, acting, and directing. After graduation, she was hired by STILETTO Entertainment to perform aboard luxury cruise ships for Holland America Line, and most notably on the QE2 for CUNARD LINE. For three years she traveled the world as the lead singer and dancer on board, traveling to all 7 continents and over 65 countries all while entertaining thousands of passengers. She then moved to New York City to continue her theatrical career and was awarded a scholarship to train in film and television acting at Weist Barron studios. In the summer of 2008, Cirque Productions debuted on Broadway with Cirque Dreams Jungle Fantasy. After a successful run, this musical theatre cirque show went on tour. Amanda was cast to replace the original singer and composer of the musical and took over as the lead character of “Mother Nature” for the year long national tour. She was the only vocalist in this production, and toured the United States, Canada, and Puerto Rico.

After a successful tour, Amanda was asked to reprise the role for a residency at the Trump Taj Mahal Hotel and Casino in Atlantic City, New Jersey. Amanda spent two and a half years working for Cirque Productions touring the country as the vocalist in Cirque Dreams Jungle Fantasy, and Cirque Dreams Holidaze. Having spent over two decades as a professional performer, Amanda began training to become a vocal instructor. In 2010 Amanda moved overseas and was hired as an associate vocal instructor at one of the most prestigious voice and recording studios in Hong Kong. The studio of choice for Hong Kong's pop, television, and movie stars. For three years, she taught private vocal lessons as well as group cabaret and musical theatre workshops for children and adults.

In addition, Amanda worked as a vocal producer on numerous professional recordings and albums released in Hong Kong and Taiwan. Currently Amanda is a vocal instructor and band performance coach at School Of Rock in southern California. She trains beginners to professionals, and has experience coaching musical theatre, country, pop, rock, jazz, and classical styles.