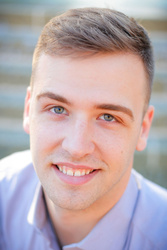 Title: Assistant Director of Communications and Development; Director of Operations
Bio: Caleb Eick is a rising multi-faceted arts professional. He regularly presents recitals of chamber music ranging from Baroque to Contemporary. His most recent engagements include performances at St. Paul’s Episcopal Church of Albany as Pilate in J.S. Bach’s St. John Passion, at The Sembrich with members of the Philadelphia Orchestra, at the National Opera Center with the Eurasia Festival, and at East Carolina University in recital for International Holocaust Remembrance. In a recent review of his performance with the Eurasia Festival, Eick, “…portrayed the pain of romantic betrayal by varying vocal colors and dynamics to suit the character's complex feelings.” (Voce di Meche, January 2019) As a soloist, Eick has been seen in venues across the Eastern United States and has traveled abroad to France and Ireland as part of ensemble tours. Eick has performed in masterclasses for world-class musicians such as Maureen O’Flynn, Jeffrey Gavett, Mikhail Svetlov, Mary Ann McCormick, Patricia Stiles, and Vera Danchenko-Stern. During the 2014-2015 season, Caleb won the first ever Auriel Scholar program auditions with the Auriel Camerata in Albany. In 2013, he assisted in the founding ARTWAVES, a collaborative visual and musical art series at the Esther Massry Gallery at The College of Saint Rose. Throughout his graduate studies, Eick taught applied voice, group voice, and assisted in group piano and music history instruction. Mr. Eick completed his Master of Music degree in Vocal Performance & Pedagogy at East Carolina University where he studied with John Kramar and Dr. Daniel Shirley. Caleb also holds a Bachelor of Arts Degree in Music and French from the College of Saint Rose. Equally comfortable in administrative capacities, Caleb holds positions with the Lake George Music Festival as the Director of Operations, with The Sembrich in Bolton Landing, NY as the Director of Outreach, and with the Russian Chamber Art Society in Washington, D.C., as the Development and Communications Consultant. His efforts in arts administration focus on preserving and expanding access to cultural programming in rural areas, particularly in Upstate New York. Previously, Caleb has held positions with East Carolina University and the Glimmerglass Festival. He is currently completing additional studies in Visual and Performing Arts Administration at New York University and a fellowship in Nonprofit Leadership at the University at Albany's Institute of Nonprofit Leadership and Community Development.
Voice Type: Baritone
Music Styles Taught: World; Pop; Opera; Jazz; Folk; Gospel; Rock; Classical; Musical Theatre
Availability: I am available as a performer; I am currently accepting private students; I am available as a clinician or presenter; I offer lessons in a group environment