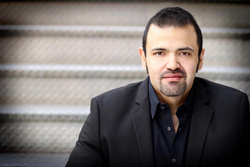 As a concert artist, Mr. Vera has successfully performed works ranging from the cantatas of J.S. Bach to the works of Britten, Tippett and Vaughan Williams. Of the oratorio/concert repertoire Mr. Vera has sung Verdi’s Requiem, Vaughan Williams’ Mass in G minor, Schubert’s Mass in G, Orff’s Carmina Burana, Mendelssohn’s Elijah, Haydn’s Lord Nelson Mass, Handel’s Messiah, and various works of Beethoven including the Choral Fantasy, the Mass in C, Missa Solemnis, and the great Symphony No. 9. He has had the pleasure of performing both Bach Magnificats, as well as the celebrated Mass in B minor.