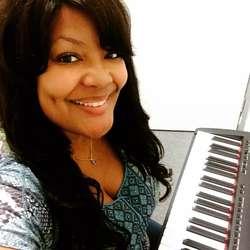 Tenaia Sanders is a Master Vocal Instructor, Established Singer and Multi-Platinum Published Songwriter, originally from Chicago, IL with 20+ years of experience in the Entertainment Industry and Teaching. She signed her first record deal when she was 18 years old, and has since then, written, recorded, and produced vocals for several major record companies, including but not limited to; Motown, Universal Music Group, Priority/Interscope, Zomba, Tee Vee Toons, and JYP Entertainment (Korea). She has been featured on songs with artists like Pit Bull, Lil Jon, and many more! She has been nominated for a Soul Train "Lady of Soul" award. She has also been an ongoing member of The American Society of Composers Authors and Publishers (ASCAP) since 1996, and has won several ASCAP Plus Awards for songwriting. Her Production/Publishing Company OOB Productions now has RIAA Certifications totaling more than 8 million copies of sound recordings sold.

Tenaia teaches The Royal Conservatory Music Development Program (RCM) Voice Curriculum. Her students have been honored by The Royal Conservatory of Music for earning The National Gold Medal for the Highest Assessment Scores in the United States of America!!! She offers private lessons and group classes for Singing, Songwriting, and Artist Developement in two locations: Woodland Hills, CA & Valencia, CA . For more information please visit The Vocal Academy website: www.thevocalacademy.net. She holds Performance Workshops to enhance stage presence, Pop Diva Camps during summer, and Studio Recitals to Showcase Talent and Learned Skills. She offers a wide variety of genres - Classical, Pop, R&B, Hip Hop, Inspirational, & Folk. She also teaches singing in several languages (French, Spanish, Russian, Italian, and Hindi). She is currently accepting students of all levels (ages 6 to adult). Although Tenaia is an Established Singer, Multi-Platinum Published Songwriter, and Master Vocal Instructor, she is also a very Nurturing Mom of two Amazing sons and a Beautiful daughter. Tenaia is a firm believer in "Pursuing Your Dreams" and is very eager to share her knowledge and experience with her students.

Voice Type: Mezzo-soprano
Music Styles Taught: World; Pop; Opera; Jazz; Folk; Gospel; Rock; Classical; Musical Theatre
Availability: I am available as a performer; I am currently accepting private students; I am available as a clinician or presenter; I offer lessons in a group environment