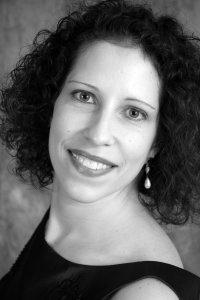 Soprano Jenice Riebe has appeared in opera, music theatre, and concert performance in Germany, Alaska, and throughout the Eastern United States. Among Ms. Riebe’s accomplishments are participating as finalist in a recent Mid-Atlantic regional NATSAA competition, winning first place in the state of Virginia. Some of her favorite opera and stage roles include Monica in The Medium, Ynoild in Pelléas et Mélisande, The Page in Argento’s Christopher Sly, and Luisa in The Fantastiks. Ms. Riebe also enjoys artistic collaboration in the chamber music venue and has toured numerous recitals, including the premiere of a twentieth century song cycle for soprano and guitar entitled Prayers of the Saints and works by Argento and Schubert with the Radford University Chamber Players.

Ms. Riebe has enjoyed fifteen years of collegiate teaching and currently teaches at Millersville University near Lancaster, PA. Previously, she was a member of the voice faculty at Radford University for ten years and has also served on faculty for the University of Alaska Fairbanks Fine Arts Camp and as Associate Professor of Music at Great Lakes Christian College in Lansing, Michigan. Most recently Ms. Riebe taught voice, musical theatre, and opera to some of Virginia’s finest young promising singers at the Virginia Governor’s School for the Arts and Humanities. She is an active member of the National Association of Teachers of Singing and of The Voice Foundation.

A native of New Jersey, at the age of twelve Ms. Riebe had her first professional engagement in a six-month run in the title role of Annie at Neil’s New Yorker Dinner Theater. Her early education included piano performance, theatrical studies in acting/improvisation, and mime, as well as dance in a Royal Academy of Ballet program. She was awarded the Alfred Hedeman College Scholarship and studied at the Tanglewood Institute, singing in a choir under the baton of Michael Tilson Thomas for Leonard Bernstein’s 70th Birthday Gala concert.

Ms. Riebe earned a Bachelor of Music degree from Oberlin Conservatory, where she studied vocal pedagogy with the acclaimed Richard Miller. She holds a Master of Music degree from University of Minnesota and received awards from both institutions for outstanding musical achievement. In addition to her post-graduate work at the University of North Carolina at Greensboro where she studied with Clara O’Brien and coached with Andrew Harley, she has worked under/coached with such notable artists as Margo Garrett, Steven Daigle, James Robinson, and Robert Spano.

When not in the vocal studio, Ms. Riebe can most likely be found in the kitchen or on a family adventure with her husband and two children.