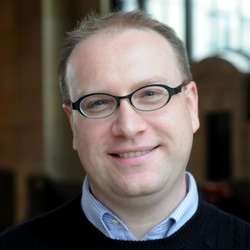 From www.jaycartercountertenor.com American countertenor Jay Carter has gained recognition as one of the nation’s finest. A frequent collaborator with period and modern ensembles, Carter is recognized as a leading interpreter of late Baroque repertoire and has been lauded for his luminous tone, stylish interpretations, and clarion delivery.

Recent appearances include Bach’s St. Matthew Passion with the American Bach Soloists and the Choir of St. Thomas Church, Handel’s Messiah with the National Symphony, and Philharmonia Baroque Orchestra, Handel’s Saul with Musica Vocale and the Kansas City Baroque Consortium, In recent seasons he has routinely appeared with acclaimed conductors Nicholas McGegan, Ton Koopman, John Butt, John Scott, and Matthew Halls. Highlights of the 2017 season include appearances throughout North America with Maasaki Suzuki and the Bach Collegium Japan, the Bach Virtuosi Festival, and the Saint Louis Symphony and Nicholas McGegan in Vivaldi’s Gloria and opera arias. This season he will make his Lincoln Center debut as the alto soloist in Bach’s Weinachts Oratorium with Suzuki and the Bach Collegium Japan.

As a researcher and clinician, Carter frequently presents masterclasses and lecture recitals for colleges, universities, and presenting organizations throughout the United States. Topics have included countertenor technique and repertory, the role of high male voices in Elizabethan and Jacobean vocal music, and concepts of masculinity in Henry Purcell’s glees and catches. ​ He holds a Doctor of Musical Arts degree from the University of Missouri Kansas City's prestigious Conservatory of Music and Dance. He also received a Masters in Music from the Yale School of Music and Institute of Sacred Music where he was a pupil of Simon Carrington, Judith Malafronte, and James Taylor. He received his undergraduate degree from William Jewell College where he studied voice with Arnold Epley. He currently lives in Liberty, Missouri with his family.

Voice Type: Countertenor
Music Styles Taught: Opera; Classical
Availability: I am available as a performer; I have a wait-list for private lessons; I am available as a clinician or presenter; I accept students through a college or university program