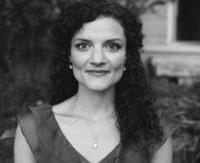 Amanda Russo Stante is an experienced and versatile mezzo-soprano, known for her ability to master both feminine and pants roles on the operatic stage. From Octavian to Cendrillon, Amanda has been recognized for her “highly theatrical, vocally persuasive” performances, which are “nothing short of stunning” (Peter Jacobi, Herald Times). Amanda has held five title roles on the IU Opera theater stage: Handel’s Serse, Massenet’s Cendrillon, Hansel in Humperdinck’s Hansel and Gretel, Octavian in Strauss’s Der Rosenkavalier, and Isabella in Rossini’s L’Italiana in Algeri. Her recent solo concert engagements include Britten’s Canticle II, Corigliano’s Fern Hill, Ravel’s Sheherazade, Duruflé’s Requiem, and Handel’s Messiah. Her experience has taken her to The Glimmerglass Festival, Indiana University Opera Theater, Central City Opera, and concert stages across the United States and Europe. Amanda has appeared as a soloist with the Budapest Concert Orchestra, The Chamber Orchestra of Pittsburgh, The Cleveland Orchestra Youth Orchestra, the Indianapolis Symphony Orchestra, the Akron Symphony Orchestra, the Wooster Symphony Orchestra, and the Harvard Symphony Orchestra.

Amanda holds a doctor of music degree in voice performance and literature from the Indiana University Jacobs School of Music, where she also received her Master of Music degree. She began her studies in higher education in her hometown of Pittsburgh, Pennsylvania at Carnegie Mellon University, where she earned a Bachelor of Fine Arts degree with a minor in German.

In addition to performing, Amanda maintains a private voice studio in Bloomington, Indiana. She also teaches at the Indiana University Jacobs School of Music and the Bloomington Montessori School. Teaching allows Amanda to share her love and passion for music and performance with all ages, abilities, and interests.