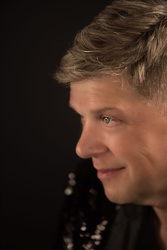 Michael Strelo-Smith burst onto the national scene with his appearances on the hit NBC/Universal program America's Got Talent. He first appeared on season two and was honored to be selected as a Quarter-Finalist. He returned for season three, where he was selected as one of the top performing acts in the United States as a Semi- Finalist. He garnered praise from audiences around the world when the show aired internationally.

With numerous musical theatre performances to his credit, some of his favorite roles include: Archibald Craven (THE SECRET GARDEN); Jack (INTO THE WOODS); Audrey II (LITTLE SHOP OF HORRORS); Charlie Brown (SNOOPY); Billy (CAROUSEL); and solo appearances in SIDE BY SIDE BY SONDHEIM, CLOSER THAN EVER, THE WORLD GOES ‘ROUND, and A GRAND NIGHT FOR SINGING. Well at home on the operatic stage Mr. Strelo-Smith has been seen as Pooh Bah (THE MIKADO); Horace Tabor (THE BALLAD OF BABY DOE); Falke in (DIE FLEDERMAUS); and Harlekin (ARIADNE AUF NAXOS). He garnered high critical praise for his interpretation of Sharpless in MADAMA BUTTERFLY with West Bay Opera, Bay Shore Lyric Opera and Livermore Valley Opera. Michael was a featured soloist in the nationally covered final concert of the Liberace Museum in Las Vegas, Nevada.

As a national finalist in the 2003 Classical Productions Voice Competition, Mr. Strelo- Smith was heard in Carnegie Hall - Weill Recital Hall. In 2000 Mr. Strelo- Smith received a study grant from the Licia Albanese - Puccini Foundation and was invited to appear in the annual winners concert in New York's Alice Tully Hall. He is also a past 1st place winner of the Berkeley Piano Club Voice Competition and a semi- finalist in the Loren L. Zachary Society for the Performing Arts.

Currently, he is on the voice faculty of the Community School of Music and Arts in Mountain View, California. In addition, he maintains a studio at Google.

Voice Type: Baritone
Music Styles Taught: Pop; Opera; Rock; Classical; Musical Theatre
Availability: I am available as a performer; I have a wait-list for private lessons; I am currently accepting private students; I am available as a clinician or presenter; I accept students through a college or university program