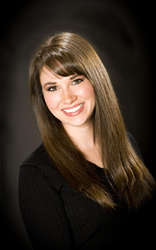 Title: Vocal Instructor
Bio: I found my love of singing at an early age and performed in my first chorale group at the age of 8. Since then, I continued to further my musical education, earning a Bachelor of Arts in Music with an emphasis in Vocal Performance and Musical Theater. Favorite roles include Belle in "Beauty and the Beast", Maria in "West Side Story" and Amy March in "Little Women". Originally hailing from San Diego, I have performed on stages across California and have been a part of several touring singing groups. In the spring of 2007, I traveled to New York with one of these singing groups and performed a concert on the stage of Carnegie Hall. I have performed in and directed numerous musical theater productions and currently teach with an after-school arts program for youth in the Denver area. I continue to perform in shows and musical reviews and now teach from my home studio.
Voice Type: Soprano
Music Styles Taught: Pop; Jazz; Classical; Musical Theatre
Availability: I am available as a performer; I am currently accepting private students