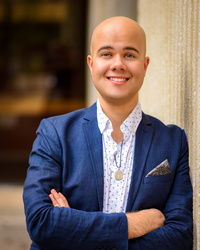 Bio: Paul M. Patinka has been described by students as “engaging, thoughtful, and thorough” with approaching vocal technique. Paul believes that every student has a unique and individual voice that they can learn to utilize to the best of their ability. As a teacher, Paul has worked with people of a variety of ages, helping them find a more free and easy sound for themselves. Paul recently graduated from the University of Delaware with a Master of Voice Performance, where they sang the role of Aeneas in Henry Purcell’s Dido and Aeneas and Reverend Parris in Robert Ward’s The Crucible. This summer, while traveling abroad, Paul performed as the soloist for the Canticle Cantata Op. 42 at the Victoria International Arts Festival in Malta. While living in Delaware, Paul sang with a number of companies including Opera Delaware, Annapolis Opera, Boheme Opera New Jersey, and the Still Breathing Ensemble. Paul has also performed as a soloist with the Catskill Symphony Orchestra on Mozart’s Coronation Mass, with the St. Anthony choir on Camille Saint-Saëns Oratorio de Noêl Op. 12, the St. Anthony Mass and again on the Coronation Mass. A frequent recitalist, Paul enjoys delving into underperformed works. His most recent recital included works based on the four seasons in 12 languages, as well as a new piece written in Arabic by D.H. Ringey to combat islamophobia. A particularly enthusiastic lover of chamber works, Paul has performed Schubert’s Die schöne Müllerin, Op. 25, Ralph Vaughan Williams Along the Field and a myriad of other chamber works and song cycles.