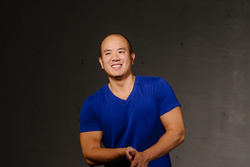 Baritone André Chiang was described as “vocally commanding” (Oregonian), “handsome of voice” (Opera News), and lauded with “let’s hear more from this singer” (Washington Post). Mr. Chiang’s recent engagements include Dandini (La cenerentola) with Dayton Opera, The Pirate King (The Pirates of Penzance) with Tulane Summer Lyric Theatre, Older Thompson (Glory Denied) with Painted Sky Opera, and Schaunard (La bohème) with Mississippi Opera. Previous credits include Young Galileo/Salviati (Galileo Galilei), for which he was commercially recorded, and Ford (Falstaff) with Portland Opera; Anthony Hope (Sweeney Todd) with Virginia Opera; and Lancelot in the Young Artist Matinee of Camelot at the Glimmerglass Festival. Competition honors include Regional Finalist for the MONC Auditions, Winner of the 59th NFMC 2017 Biennial Young Artist Award, and Winner of the 45th NATS Artist Awards Competition. In concert, Chiang performed as the Baritone soloist in Carmina Burana with the Huntsville Symphony, Baton Rouge Symphony, and Canterbury Voices. His Stern Auditorium at Carnegie Hall debut came as the Baritone soloist in the World Premiere of Martin Palmeri’s Gran Misa. Upcoming engagements include Masetto (Don Giovanni) with Dayton Opera and Escamillo (Carmen) with Mobile Opera. Chiang received his Bachelor of Music from the University of South Alabama, Master of Music from the Manhattan School of Music, and Doctor of Musical Arts from Louisiana State University. As an educator, Chiang was a 2018 NATS Intern, designated a “National Center for Voice and Speech trained Vocologist” in 2019, and was a Featured Performer, Presenter, and Panelist at the 2020 NATS National Conference. Additionally, he maintains an active private studio teaching classical and CCM styles. www.andrechiangbaritone.com

André actively teaches online around the country and in-person in the central Oklahoma area. He recently joined the faculty of Oklahoma State University as an Assistant Professor of Music - Voice. He is proficient in classical, musical theatre, and popular styles. Through his years performing both opera and musical theatre and working with some of the biggest names in the industry, he brings many different perspectives on vocal technique and individually caters his instruction for each student. André is available for on-site and online lessons and will help you reach your goals!