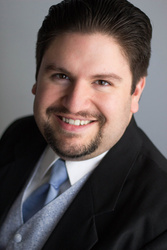 Title: Choir & Musical Theatre Director/Adjunct Voice Professor
Bio: Max A. Moreno, baritone, holds Bachelor's and Master's degrees from both Utah State University and Portland State University in Oregon in Vocal Performance. He received his Doctor of Musical Arts degree in Vocal Pedagogy & Performance at the University of Miami's Frost School of Music in Coral Gables, Florida in May of 2016. He currently is the Director of Choirs and Co-Director of Musical Theatre at DaVinci Academy of Science and the Arts in Ogden, Utah. He also teaches part-time private voice at Weber State University. Dr. Moreno has appeared in various performance venues around the United States and Central and South America, including two seasons with the Utah Festival Opera and Musical Theatre and a series of master classes and recitals in both Antigua, Guatemala and Santa Ana, El Salvador. A versatile performer, he enjoys singing and teaching in all styles, including barbershop, opera/classical, musical theater, contemporary commercial, and vocal jazz. Dr. Moreno has appeared in a myriad of roles on the operatic and musical theater stage, including: Horton in Seussical, Papageno in Die Zauberflöte, the title role in Giulio Cesare in Egitto, Bob in The Old Maid and the Thief, Ali Hakim in Oklahoma!, the Marquis de la Force in Dialogues of the Carmélites, Aristotle Onassis in Jackie O, the title role in Gianni Schicchi, Rambaldo in La Rondine and the title role in Sweeney Todd. He is a current member of the Tabernacle Choir at Temple Square and has also appeared as a featured soloist with the American Festival Chorus. He also sang backup for Andrea Bocelli in his annual Valentine’s Day concert in Ft. Lauderdale, Florida and has also performed in the chorus of the national tour of The Legend of Zelda, Symphony of the Goddesses. He also enjoys work in all other facets of musicianship, as a director, conductor, arranger, composer, coach, and pianist.
Voice Type: Baritone
Music Styles Taught: Opera; Jazz; Folk; Gospel; Rock; Classical; Pop; Musical Theatre
Availability: I am available as a performer; I offer lessons in a group environment; I have a wait-list for private lessons; I am available as a clinician or presenter; I accept students through a college or university program