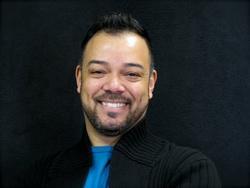 Eliomar Nascimento, started as a pianist earning a Bachelor’s degree in Piano Performance from the Brazilian Conservatory of Music in Rio de Janeiro. Subsequently, he dedicated his career to the Operatic stage pursuing another Bachelor’s degree in Voice from Federal University of Rio de Janeiro, Brazil. He then moved to Boston for a Master’s degree in Vocal Performance from Boston University, followed by a Certificate Diploma from the Opera Institute at the same institution.

While at Boston University, he tackled roles like Figaro in Mozart’s Le Nozze di Figaro and Don Alfonso in Mozart’s Così fan tutte. Praised by the Boston Herald as the owner of a “Deep, lush voice” for his portrayal of Don Basilio in an English version of Rossini’s Barber of Seville, he has also appeared in productions of La Traviata, Lo Schiavo, I Pagliacci, Elektra, Salome, La Clemenza di Tito, Magic Flute, Bluebeard’s Castle and many others with companies such as Opera Brazil, Opera Aperta, Real Time Opera, Connecticut Lyric Opera and Boston Lyric Opera.

As an avid educator and researcher, Mr. Nascimento is a Tomatis® Method Practioner. The method invented by the French scientist Alfred Tomatis, considered the Einstein of the ear, works with an electronic device that uses a sound training therapy processed music to stimulate the Auditory Processing System. This stimulation enables a precise integration of acoustic information and allows the brain to better receive, select and process this information. The method’s application has a direct impact on the voice making it suppler, lighter, more tinted, endowed with a more precise articulation, and goes way beyond musical application including ADD, ADHD, Dislexia, Speech issues, and much more! Placido Domingo, Sting and Maria Callas are some of the famous clients of this method largely diffused in Europe.

I the years 2000 and 2002 Mr. Nascimento has brought his musical experience as a faculty member to the Young Artists Vocal Program for Boston University Tanglewood Institute in Lenox, MA. Currently as faculty member of the PAC - Performing Arts Center Metrowest, Mr. Nascimento teaches voice, piano, Opera Workshop and has also been the Music Director for many of the musical theater Summer programs and full productions staged at that institution. Mr. Nacimento is fluent in English, Portuguese, Spanish and Italian.

Voice Type: Bass
Music Styles Taught: Opera; Classical; Musical Theatre
Availability: I am available as a performer; I am currently accepting private students; I offer lessons in a group environment