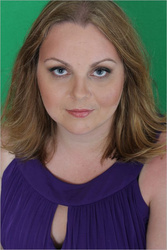 Sara Stejskal, a lyric dramatic soprano, has sung throughout the world in repertoire ranging from Pamina (Die Zauberflöte) to Turandot (Turandot) and almost everything in between, though she feels a particular connection to the operas of Mozart, Verdi and Strauss. She has been called “a voice of beautiful lyric line and dramatic power” (Shoreline Enterprise)

Ms. Stejskal began her musical journey with piano lessons at five. Soon after, band, choirs and voice lessons followed. By her teens she was singing in honor choirs, opera chorus, winning competitions and performing roles in musical theater and opera. Over the next years, she directed community, church and children’s choirs, taught voice and continued performing in jazz, musical theater, oratorio and opera.

In 2010, she began her Bachelors of Music degree at the University of Hawaii in Vocal Performance. During her studies, she received annual talent scholarships and honors research grants as well as winning a number of competitions. She also participated as a Studio Artist in the Mae Z. Orvis Studio at Hawaii Opera Theater. Relocating to Philadelphia in 2014 she began her Masters of Opera studies at Boyer College of Music on full scholarship, where she sang in operas, concerts, galas and placed in a number of competitions throughout the east coast. She continued her studies in Voice and German in Berlin, while also singing in a number of concerts and galas. She recently relocated back to Honolulu with her husband and three sons, where she is teaches at Maunawili Elementary as well as private voice and piano, and performing throughout the Islands and beyond.

Voice Type: Soprano
Music Styles Taught: Pop; Opera; Jazz; Folk; Classical; Musical Theatre
Availability: I am available as a performer; I am currently accepting private students; I am available as a clinician or presenter; I offer lessons in a group environment