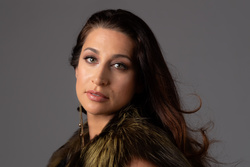 Please visit www.solmaazadeli.com for a full bio and schedule.

An accomplished opera and concert singer, mezzo-soprano Solmaaz Adeli gave her debut 2011/12 season at the Vienna Chamber Opera in the role of Flora in Albinoni’s Il Nascimento dell’Aurora and went on in same season to create the title role in François Pierre Descamp’s new opera Zumurrud at the Vienna Chamber Music Festival.

An avid performer of Contemporary music, in 2019 she gave the US Premiere of Scott Ordway’s Girl in the Snow, has debuted the West Coast premiere of Norwegian composer Kim André Arnesen’s Requiem and the world premiere of Dolcissime Suite by Grammy Award Winning Barry Phillips. Summer 2020 takes her to Vienna to debut the title role of ELSA in a new chamber opera by Croatian composer Margareta Derek-Petric with the Sireneoperntheatre.

Concert appearances and recitals have taken her to perform at the Vienna State Opera’s Marmorsaal, the US Embassy of Vienna, Brahms-Saal at the Wiener Musikverein, and as a SongFest Fellow working with Graham Johnson, Sir Thomas Allen, and Susanne Mentzer.

Ms. Adeli received a scholarship to attend the Opera School at the University of Music and Dramatic Arts in Graz, Austria, and studied privately in Vienna as well as the Prayner Konservatorium Vienna and as an apprentice under director Davide Livermore in Turin, Italy.

Ms. Adeli holds a Bachelor of Arts in Environmental Studies and Earth Sciences from the University of California Santa Cruz and after a career in the sciences, decided to pursue a career in music.

Voice Type: Mezzo-soprano
Music Styles Taught: World; Opera; Jazz; Folk; Gospel; Classical; Musical Theatre
Availability: I am available as a performer; I am currently accepting private students; I am available as a clinician or presenter; I offer lessons in a group environment