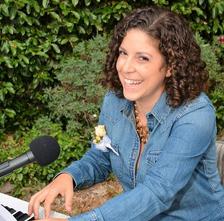 Alissa Strople owns her own music studio teaching voice and piano in Ventura, California. She has been teaching private music lessons since 2004. Alissa earned her Master’s in Music, focusing on Vocal Performance from UC Santa Barbara where she was a voice teaching assistant in charge of teaching three separate levels of voice classes. Before returning to school for her master’s degree she was an elementary and middle school music, choir, and performing arts teacher in Ventura, Ca. There she wrote and directed the bi-annual school plays and musicals and lead her middle school choirs to first place finishes in multiple choral competitions. Alissa has studied and taught voice and piano in all genres including Classical, Broadway, Jazz, Pop and Contemporary music. She has helped many students prepare for successful auditions with the Los Alamitos High School Choirs, Orange County School of the Arts, Long Beach Playhouse, The Attic and many Universities including UCSB and Pepperdine.

In her performing life, she sings regularly in Classical music engagements in the southern California area. Additionally she gigs for weddings and sings for fun in various arenas. At UCSB she placed first in the Concerto Competition performing “Glitter and Be Gay” with the UCSB orchestra. Some of her operatic roles include Despina, Queen of the Night, Susanna, Olivia in the stage premier of Dr. Joel Feigin’s opera Twelfth Night, Corilla in Donizetti’s Viva la Mamma, Nora in Rider’s to the Sea, and Constance from Poulenc’s Dialogue of the Carmelites. She has studied both in Graz, Austria with the American Institute of Music and in Milan, and Italy where she performed by invitation in Vienna. Additionally, Alissa won second place in the Stockton Opera Guild Competition.

Outside of Performing Alissa served at the Steven Rothenberg Fellow with Ojai Music Festival where she worked with the Festival Producer to coordinate artists and their needs throughout the Festival as well as on stage and with the Stage Manager to help produce the Festival’s concerts, manage rehearsals and performances, stage changes, and coordinate between lighting and sound engineers.

Voice Type: Soprano
Music Styles Taught: Pop; Opera; Jazz; Classical; Musical Theatre
Availability: I am available as a performer; I have a wait-list for private lessons; I am currently accepting private students; I offer lessons in a group environment