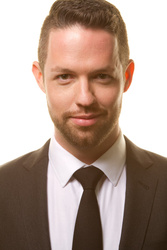 Grant Anderson is a singer, vocal technique teacher and performance coach residing in New York City. His primary training is in classical voice and applied vocal pedagogy allowing him to be adept in teaching across all singing styles/genres. Additionally, his first instrument was piano making him an asset as both a studio accompanist and recitalist.

Mr. Anderson’s teaching approach is closest to Bel Canto while recognizing the four systems of the voice and their collective symbiosis. He believes in the free, natural and unique voice. This means finding your true vocal expression, no matter the goal or skill level. His no nonsense style of teaching allows students to be themselves and achieve maximum growth in a short time, while having some fun along the way!

He holds a B.M. in Vocal Performance from Lawrence University where he studied under Dr. Karen Leigh-Post as well as a M.M. in Vocal Pedagogy from The Boston Conservatory of Music at Berklee where he studied with Kevin Wilson. He is currently Voice Faculty at Marymount Manhattan College, The Harlem School of the Arts and maintains a private roster of professional performers.