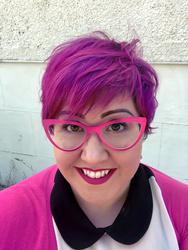 Sheila Christie, B.Mus. (UofL), M.Mus. (UBC) Sheila Christie is a classically-trained dramatic soprano and passionate educator who has led her students to great personal and professional success in music and performance. She is a member of the National Association Teachers of Singing (NATS) with more than 15 years of experience teaching classical voice, opera, and musical theatre. In 2018, Sheila was awarded “Teacher of the Year” from the Coquitlam District Music Festival. Sheila is a member of faculty at the Richmond Academy of Dance and maintains a private home studio in Surrey, BC. She also consults with the Delta School District in their academies program to offer vocal training to the students of the Delta Opera & Performance Academy with Vancouver Opera and the Delta Film Academy. Many of her students have been selected to compete in the BC Provincial Music Festival where, for the past four years, her students have achieved placements in both the classical voice (2015, 2016, 2017, 2018) and musical theatre (2017, 2018) categories. Sheila’s students have gone on to study at the University of British Columbia, the University of Lethbridge, the Vancouver Academy of Music, Boston University’s Tanglewood Summer Institute, Sheridan College, Randolph Academy, the Canadian College for Performing Arts, and Capilano University.

Sheila is a sought-after adjudicator and clinician. In 2018, she adjudicated the Lethbridge & District Music & Speech Arts Festival, presented a masterclass at the University of Lethbridge (her alma mater), adjudicated at the Vancouver NATS Songfest, and conducted a series of masterclasses with the Young People’s Opera Society of BC. In 2019, Sheila is excited to adjudicate at the Prince George & District Music Festival and at the Lakehead Festival of Music and the Arts in Thunder Bay, ON. Sheila firmly believes that professional development is essential to her success. Thanks to grant from the Vancouver Opera Chorus Endowment Fund; she attended the NATS National Conference in Las Vegas in 2018 and attended several masterclasses on new techniques for teaching and supporting young voices.

In addition to teaching, Sheila maintains a busy performing career. In her most recent appearance as soprano soloist in Britten’s War Requiem with the Vancouver Symphony Orchestra (VSO), she met with great critical acclaim: “The late Russian diva Galina Vishnevskaya’s inimitable sound informs the soprano writing, and the young Christie worked the part’s fierceness, defiance, and almost hysterical intensity.” (David Gordon Duke, classicalvoiceamerica.org). Before joining Vancouver Opera’s Yulanda M. Faris Young Artist Program, Sheila was a featured artist in the Georgia Straight’s Fall Arts Preview. As a member of the Young Artist Program, Sheila performed the title role in Gustav Holst’s Savitri and covered four mainstage roles including, Tosca (Tosca), Lady Billows (Albert Herring), Donna Anna (Don Giovanni), and Elisabetta (Don Carlo). Further highlights include, the High Priestess in Aida and Giovanna in Rigoletto with Vancouver Opera, Soloist in “An Evening in Roma” with the Vancouver Symphony Orchestra, Hanna Glawari in The Merry Widow with Burnaby Lyric Opera, and soprano soloist in Beethoven’s Symphony No. 9 with the Vancouver Philharmonic Orchestra. Sheila is a long-standing member of the Vancouver Opera Chorus and is often to perform at Vancouver Opera’s community events.

Voice Type: Soprano
Music Styles Taught: Pop; Opera; Jazz; Folk; Classical; Musical Theatre
Availability: I am available as a performer; I am currently accepting private students; I am available as a clinician or presenter; I offer lessons in a group environment