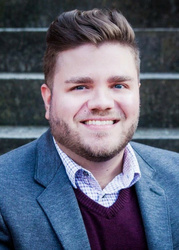 Blayne Ziegenfuss, tenor, originally from North Carolina, has extensive stage and recital experience in both musical theater and opera. He is a graduate of the University of North Carolina at Greensboro where he received his Bachelor of Music in Vocal Performance and his Master of Music in Vocal Pedagogy. His musical theater experience includes roles such as Sky Masterson in Guys and Dolls and Senex in A Funny Thing Happened on the Way to the Forum. While at UNCG, Blayne sang the roles of Kaspar in Amahl and the Night Visitors, which he also sang with the Durham Children’s Choir, Gabriel Von Eisenstein in Die Fledermaus, The Defendant in Gilbert and Sullivan’s Trial by Jury, along with participating in the ensembles of The Mikado, L’Enfant et Les Sortilege, L’Enfant Prodigue, and Cendrillon. Blayne also sang Timothy in Help, Help, The Globolinks!, the First Slave in The Magic Flute, and participated in the ensemble of La Traviata with Greensboro Opera. More recently, Blayne was seen participating in the ensemble of Donizetti’s Lucia Di Lammermoor and Gounod’s Roméo et Juliette with Knoxville Opera.

On the concert stage, Blayne has performed as a soloist in Mendelssohn’s Elijah, Mozart’s Requiem, Handel’s Messiah, and Handel’s Dixit Dominus. Recently, Blayne co-presented an art song concert at the Clara Center for the Performing Arts in Sacramento, CA with a longtime friend and composer, Carlos M. Fuentes.

Blayne currently resides in Knoxville, TN and operates the Knoxville School of Voice. He is an active member of the National Association of Teachers of Singing (NATS), a student of Lorraine DiSimone, and a current board and singing member of the Knoxville Choral Society.