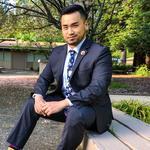 Contemporary countertenor, composer, and choral clinician, DARITA SETH, born and raised in Columbus, Ohio, is serving as Director of Music at St. Timothy's Episcopal Church in Danville, California. Recently, Darita concluded his tenure with Chanticleer, the Grammy Award-winning, San Francisco-based men's vocal ensemble. A Sigma Alpha Iota distinguished member, he periodically appears as a guest soloist with the Bay Area Rainbow Symphony, soundingLight Chamber Choir, and Reconciliation Singers Voices of Peace. Prior to his transplant to the San Francisco-Bay Area, Darita attended Capital University's Conservatory of Music where he studied vocal performance. While at Capital, Darita sang with the renowned Chapel Choir, Philomel, and performed roles in operatic and music theatre productions. While pursuing his undergraduate degree, Darita began studying countertenor while immersed in the sacred early music at Saint Joseph Cathedral in Columbus. Darita is also a proud alumnus of the Interlochen Arts Academy and Camp, where he participated in the composition, opera, and choral programs, as well as spending summers working for the offices of Advancement and Arts Administration. Darita is an active member of ACDA, NATS, and ASCAP.

Praised for his "technical deliciousness; power and precision of the connection between the colors of the voice; and beauty of delivery," (Aspen Music Festival) Darita has been featured in performances of choral masterworks including Bernstein's Chichester Psalms, Durufle's Requiem, and Handel's Messiah. Additionally, Darita has recorded with AireBorn Studios (Zionsville, IN), featuring his voice on premiere recordings for various new music publications. As an actively traveling musician, he has performed in many notable international concert venues including Musikverein in Vienna, Austria; The Liszt Grand Concert Hall in Budapest, Hungary; Endler Hall in Stellenbosch, South Africa; The National Concert Hall in Taipei, Taiwan; and The Esplanade in Singapore. His voice has led him to sing under the baton of some the nation's leading composers and conductors such as Eric Whitacre, Jake Runestad, Dan Forrest, and Morten Lauridsen.